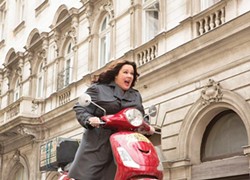 Since her breakthrough a couple of years back, Melissa McCarthy has struggled to find the right vehicle for her comedic talents, a beguiling mix of sweetness, weirdness and physicality. But her reunion with director Paul Feig (Bridesmaids, The Heat) in the espionage spoof Spy is her golden ticket: She owns this movie in every which way.

McCarthy portrays Susan, a desk jockey at the CIA who after asserting herself (lean in, girl!) gets a field assignment to simply "track and report" on some European baddies. Despite being disguised as a series of middle-aged frumps, Susan winds up befriending a villain (Rose Byrne) and goes deep undercover, neatly smashing all pre-existing expectations. Because, yeah, Susan was always smart, quick-witted, attractive and kick-ass — that's the world's bad for not noticing.

The plot is just an excuse to give the well-known cast, which also includes Jude Law, Allison Janney, Jason Statham and Bobby Cannavale, a chance to flex their own comedic skills (often by mocking their usual roles) — and to introduce a mostly-new-to-us, winning British comic actress, Miranda Hart (Call the Midwife), as Susan's CIA buddy.

The jokes range from smart to silly to raunchy, but everything moves quickly, steered by the hard-working McCarthy. Spy joins this summer's other big hit, Mad Max: Fury Road in presenting characters who are strong, capable women (some even middle-aged!). Maybe you won't notice because you're cheering for McCarthy and her gal pals here, but some feminism just got real — and funny.