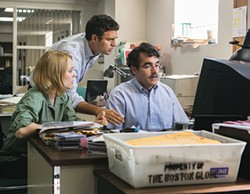 Spotlight depicts the frustrating, grueling and ultimately successful marshaling of information — from interviews and court documents, to deep dives into mundane data and fraternal networking — that allowed the team to suspect, and then prove the systemic failure of the archdiocese to address what turns out to be a collective secret. Among the challenges the Spotlight team faces is how deep the Church’s political, cultural and emotional influence runs through Boston. (“A city flourishes when its best institutions work together,” Cardinal Law tells the Globe’s Baron.)

It is explosive subject matter, presented soberly as an investigative procedural. McCarthy, who has a deft hand with smaller films (The Station Agent, The Visitor), finds space for, but doesn’t overplay, some of the more emotional beats. There are the distraught and damaged survivors; the growing horror of where the investigation leads (“They knew, and they let it happen — to kids”); and the personal toll it takes on the reporters (all raised Boston Catholics), who come to realize that the pieces of the story were there all along.

But the downbeat material is matched by a quiet celebration that the dogged pursuit of the truth can and should matter, and that journalists, given resources, can provide this necessary check on power. The Spotlight team had a year to gather data and get the story right — a story that had global impact. That license seems unthinkable these days in reporting, and as inspiring as Spotlight is, hopefully it isn’t also an elegy.