Sports Illustrated writer S.L. Price paints a beautiful, painful portrait of Aliquippa and its football program in Playing Through the Whistle

“I don’t think anyone gets out of Aliquippa wholly clean.” 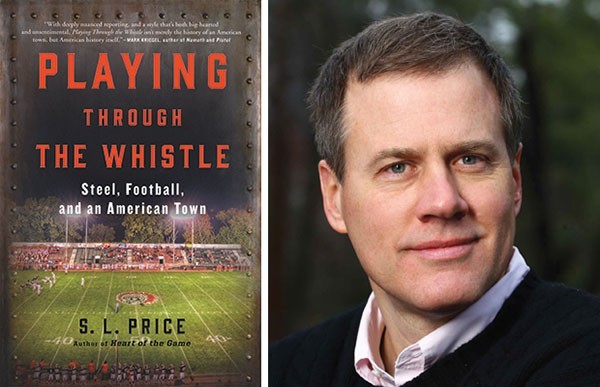 6 p.m., Thu., Nov. 3. Carnegie Library Lecture Hall, 4400 Forbes Ave, Oakland. Free. pittsburghlectures.org/
You don’t have to be native to Western Pennsylvania to have heard about Aliquippa football. Author S.L. Price isn’t from here, but as a senior writer for Sports Illustrated he knew about the small, decaying former milltown that was churning out football stars like prep schools churn out future congressional aides.

In 2010, Price went to Aliquippa on assignment for SI. The result was a 10,000-word story, the longest he’d ever written. It also drove him to return to the town over the course of the next five years, conduct scores of interviews, and experience life and death in Aliquippa. The result is a 550-page book called Playing Through the Whistle (Atlantic Monthly Press), which looks at the town’s past, present and future through the eyes of its residents and its football team.

“The story in Sports Illustrated was based on the fact that Aliquippa had so many incredible football players,” Price says. “A lot of Western Pennsylvania towns can claim one — guys like Joe Montana, Joe Namath and Johnny Unitas — but Aliquippa can claim four or five who are in or in the future should be in the Hall of Fame.”

“Everything that happened in Aliquippa happened to the extreme,” Price says. “A lot of places had racial problems in the 1970s; Aliquippa had riots. It boasted one of the largest steel mills in the country. Aliquippa was ground zero for a lot of labor/management battles and it marked the rise of unionization in this country.

“I just couldn’t get around the fact that America kept happening in Aliquippa in very extreme ways. That’s just irresistible to a writer. I knew this place was special, and I wanted to show how it was special, even if I can’t explain why.”

One special thing that struck Price about Aliquippa was the openness of the community. Despite years of hardships and ongoing trouble, he found people more than happy to talk about their experiences, their history, their victories and their struggles.

“I was surprised a bit, but I really got a warm welcome from everyone in town,” Price says. “They gave me their time and they shared their stories because they want their story, Aliquippa’s story, told. They deserve to have their story told. Aliquippa is an important place in sports, culture and American history.”

Price talks and writes about The Pit with the same reverence that some fans talk about Lambeau Field or Fenway Park. While he says the old stadium, which sits on a bluff and looks like it could slide over the hillside at any minute, it’s the most important spot in town.

“No matter what else happens in town, no matter what anybody else is into, the Pit is a safe haven, or at least it’s a safer place for the players,” Price says. But even at that he says, “these kids are not immune to what’s happening in their town. This program loses five or six players a year to the streets.

Price’s book is a tale that can swing from triumph to heartbreak in almost the blink of an eye. Nowhere is this more obvious than when he tells the story of Aliquippa’s football players. When the mills closed, Price says, “crime rushed in to fill the vacuum, along with football.” Those two activities became the town’s biggest pastimes, and in most instances the same players were involved. Law, for example, would go on to win three Super Bowls with the New England Patriots, but he almost never made it out of the Quip. His mother an addict, Law turned to slinging crack while he played football. It lasted only a month for two reasons: finding himself selling drugs to people just like his mother, and a gunfight that almost cost him his life. Price also tells the story of Jonathan Baldwin, who was drafted by the Kansas City Chiefs, had a half-brother, Jamie Brown who is serving 20 to 40 years in prison for the murder of Aliquippa Police Officer James Naim.

Price uses these stories to illustrate how getting out of Aliquippa requires walking a fine line. For every kid like Law or Revis, Price says, there are “four or five more just as talented who never make it out.” On the day that Price’s book came out, for example, two Aliquippa football players were arrested on murder charges stemming from a $140 marijuana deal that went bad.

“I don’t think anyone gets out of Aliquippa wholly clean,” Price says. “Everyone has had to deal with some kind of loss, some kind of pain to get out.

“The toll of coming through there is constantly felt. In a way, these guys didn’t get out of Aliquippa as much as they were able to escape.”

If you must share fake news, make it sports