Could the haircut franchise meet my high standards of masculinity?

CP photo: Josh Oswald
I sat the bench a lot in grade school basketball, so this felt familiar.

I don’t have a hairstyle, don’t like getting my hair cut, and the only thing keeping me at my Supercuts was that for every ten cheap haircuts, I got a free one — but that promotion has recently been killed off. So other than the free suckers and the stylists’ hands that smelled like smoke, there was no reason to stay.

I decided to satisfy my morbid curiosity by going to Sports Clips. The entire concept of a safe space for men (as if they needed one) that shows sports and mimics the aesthetics of a gym locker room is archaic and embarrassing. The idea that all men crave are sports and sandwiches and tools, while sometimes accurate, is just lazy marketing.

But at the very least, my visit would be amusing and result in a haircut. I was convinced all the customers would celebrate their successful, lady magazine-free buzzcuts with a masculine slap on each other’s asses — just like professional athletes. There’d be balls to toss, dudes to fight, and maybe a classic car or two to restore somewhere in the back. And not a single piece of non-white, male culture would be within 100 square feet of me. I could finally relax.

When I walked in, I entered the waiting area where ESPN’s Stephen A. Smith was screaming from a giant TV (dudes love huge TVs) about something no one cares about. Right on track. Underneath the TV was Sport Clips’ literature, Golf and ESPN magazines were perched on the tailgate of a pickup truck that came out of the wall. The wall mural was the bed of said pickup truck and included paintings of a bag of charcoal and a cooler. My T was spiking like Sinjin Smith. How could I possibly sit still for a haircut knowing there was a whole world out there with so much grilling and light beer drinking needing to be done?

I wanted Sport Clips to be bad. And judging strictly by the decor garnered from a random sampling of 45-year-old men from Plano, Texas, it was. But the woman who cut my hair was nice and asked me how I wanted my hair. I didn’t know, so I kind of moved it around to how I thought it should be, and she figured it out. She also told me that I could come back between haircuts for 30 days after and get touch-ups (I won’t do that). And since this was my first time at a Sport Clips, I would receive the MVP (a precision haircut, hot towel, head and shoulder massage) for free. The place was clean. The people were nice. And I think I like my haircut. And isn’t a somewhat-satisfied customer what it’s all about? 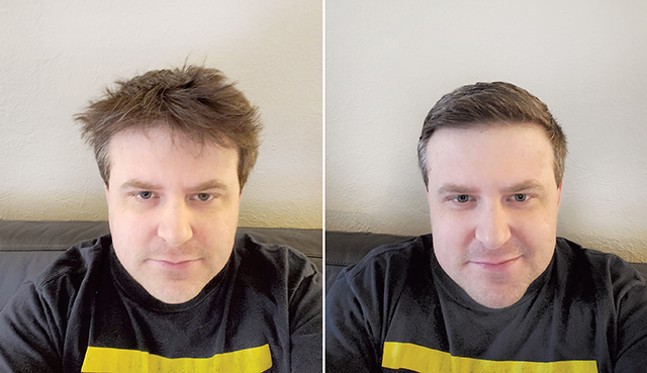 Going out on New Year's Eve is silly — just silly!

An oral history of my elite solo-parenting performance