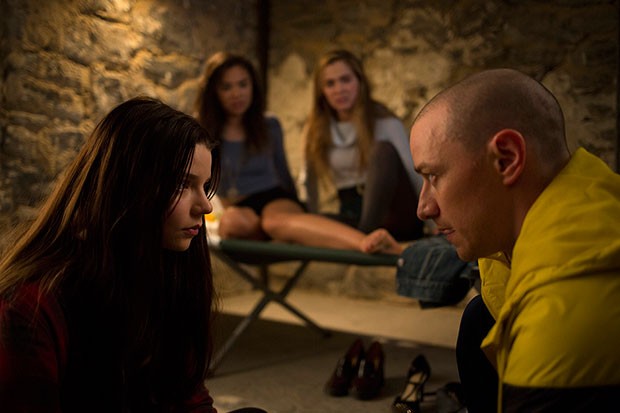 Person to persons (in foreground): Anya Taylor-Joy and James McAvoy

Directed by M. Night Shyamalan
Starring James McAvoy, Anna Taylor-Joy, Betty Buckley
Three teenage girls are kidnapped from a mall parking lot by an intense dude. They wind up imprisoned in a basement, captives of Dennis (James McAvoy). No, wait — he’s Barry. Um, is that Dennis/Barry in a dress?

The gimmick of Split, M. Night Shyamalan’s otherwise rote locked-up-by-a-bad-guy thriller, is the kidnapper has dissociative identity disorder (formerly multiple personality disorder). Thus the three young women (Anna Taylor-Joy, Haley Lu Richardson and Jessica Sula), depending on who they’re talking to, face different challenges and opportunities while trying to stay safe and hopefully get free.
For instance, Dennis is uptight and a clean freak. When the girls’ clothes get dusty early on, he has them strip to their underwear. They stay exposed, even though “Barry” is a fun clothing-designer, “Patricia” is a kind English woman, and 9-year-old “Hedwig” is easily manipulated. (File under: icky plot hole.)

It’s Barry who turns up at the office of Dr. Fletcher (Betty Buckley), who helps Barry and co. — he has 23 identities — stay organized as a functioning person. But Fletcher’s main job is to explain all the psychology, like a walking pop-up bubble; it’s a bit of a drag. (And speaking of explaining, Shyamalan pops up in a cameo as a character whose sole purpose is to provide a shruggy defense of Hooters. File under: why?)

McAvoy likely had a blast playing these disparate characters and I’d watch his campy one-man show anytime, but his hard work can’t save this mess. And let us never ever speak of personality No. 24, who emerges in the final reel to remind viewers that Shyamalan has serious trouble closing movies. (The absolute last scene is an embarrassing bit of lily-gilding you may want to talk about. Oof.)

Split could have been a tense psychological thriller, a battle of wills between captor(s) and captives, but the film veers from silly to tedious. It never makes a clear case for the kidnapping — it’s like we’re just dropped into a play-acting exercise — and it employs some tiresome tropes like fetishizing trauma (“the broken are the more evolved”), sensationalizing mental illness and invoking rape threats. (Too often in popular entertainment, rape is casually incorporated as a cheat for being edgy, adding sexual frisson or as lazy way of establishing “character” for female characters; Shyamalan hits the trifecta here.)

And yet, the MPAA ratings board never fails to surprise: Split, with its stripped teenagers, assorted beatings and killings, child sex abuse and non-stop menacing of young women by an unstable and violent man, is a take-the-family PG-13!