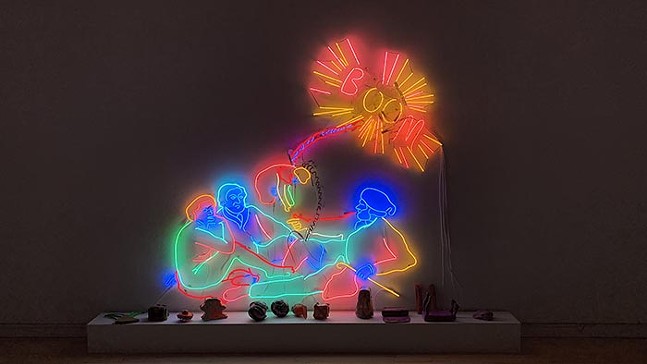 Photo: Courtesy of Miller ICA
“Black Luncheon,” part of Spirits Roaming on the Earth at Miller ICA
It’s yet another gray, stormy summer afternoon in Pittsburgh when I visit the Miller Institute for Contemporary Art at Carnegie Mellon University. But inside, it’s a whole other scene, as I’m greeted with neon lighting, projections of vibrant computer-generated animation, and an ambient EDM soundtrack. This is the world of Spirits Roaming on the Earth, described in a press release as the “first major monographic survey” of artist Jacolby Satterwhite’s “wide-ranging practice.”

And, “wide-ranging” is putting it lightly, as Satterwhite, who is based in Brooklyn, implements 3D animated films, sculpture, prints, virtual reality, and more to create a fantastic audiovisual soundscape, with imagery that draws from art history, video gaming, queer club scenes, and Black culture. The show, now open through Dec. 5, fits nicely with CMU’s culture of highlighting new media in art, as younger generations have increasingly turned to technology, both old and emerging, as a way to bring their visions to life.

For Satterwhite, the emphasis on new media heightens his life story and how it extends beyond its subjectivity by relating to the wider Black LGBTQ experience. The works on display deftly integrate cultural references from the now 35-year-old artist’s childhood (don’t be surprised to see Super Mario Bros. characters in a print) with scenes that nod to his present love of fashion, club music, and voguing.

A less keen eye may find the show messy and lacking in substance, a dizzying mashup of manipulated analog video, searing red neon, and ephemera. Ascending through the exhibit, spread out over the gallery’s three floors, clear themes emerge to string the works together, creating a stream-of-consciousness examination of what brought the artist to where he is now. Most prominent among these are the tributes to his late mother and muse, Patricia Satterwhite, a woman whose own ambitions were hindered by a number of factors, including mental illness.

The first floor hints at the delights to come with Country Ball, a film featuring an ever-moving parade of figures, both animated and human, dancing against a CG background. The projection serves as a companion to Matriarch’s Rhapsody, another projection that, like Country Ball, is populated with rotoscoped images of the many inventions Patricia sketched throughout her life, all accompanied with scrawled, often inexplicable descriptions of their purpose. Satterwhite is quoted as saying, “In her schizophrenic condition, she would talk to herself 12 hours a day while drawing,” hinting at the complicated relationship he shared with his mother, who died in 2016.

CP Photo: Amanda Waltz
“Room for Doubt,” part of Spirits Roaming on the Earth at Miller ICA
Between the two projections sits a small retail space selling items printed with the artist’s work, as well as a vinyl record display outfitted with listening stations. The latter further cements the inextricable creative bond between mother and son, as it boasts Satterwhite’s concept album, Love Will Find A Way Home, made with musician Nick Weiss, which samples 14 a cappella tracks by Patricia, who, in addition to her concept sketches, left behind numerous cassette recordings.

The first floor both serves to comment on the role capitalism plays on an artist’s process (Patricia, as it's explained, sketched products she meant to sell on QVC), and announce Satterwhite’s origins.

The second floor proves no less bold, as viewers are treated to multiple video installations, sometimes presented in unorthodox ways. This is the case of “Room For Doubt,” a life-sized sculpture based on 17th-century Italian artist Carravaggio’s Biblical tableau painting The Incredulity of Saint Thomas. In this case, four Black figures are perplexed by tiny screens embedded in their mid sections, all screening footage of a provocative 2009 performance by Satterwhite titled “The Robin vs The Worm.”

There’s also a video hovering on the ceiling above another sculpture of four figures who boast both male genitalia and sharply pointed breasts. The work points to a theme running through many of the pieces, where Satterwhite derives power from queerness, performing as a “multi-gendered nymph-like warrior,” weaponizing his dance moves and whipping braids against incoming objects, or shooting CG bubbles from a pair of breasts.

The music being pumped in floated up to the third floor, following me as I explored yet another phase of the exhibit. Here, the works are more sparse, with the animated neon light sculpture “Black Luncheon” serving as a centerpiece. On this floor, viewers will find the show’s pièce de résistance, a set of VR headsets tucked in a far corner of the space under a neon “Throne” sign.

At the risk of sounding like a complete Luddite, I must admit my experience with VR is limited at best, so Satterwhite’s visions served as my introduction to the technology. And what visions they are, as I was immersed into worlds populated by figures dancing and strong men flexing alongside Ent-like giants and skeletons. Satterwhite’s fascination with bygone pop culture is on full display, as I was treated to 360-degree dreamscapes recalling dystopian cyberpunk, old video games, and throwback CG animation reminiscent of cartoon series like Reboot. 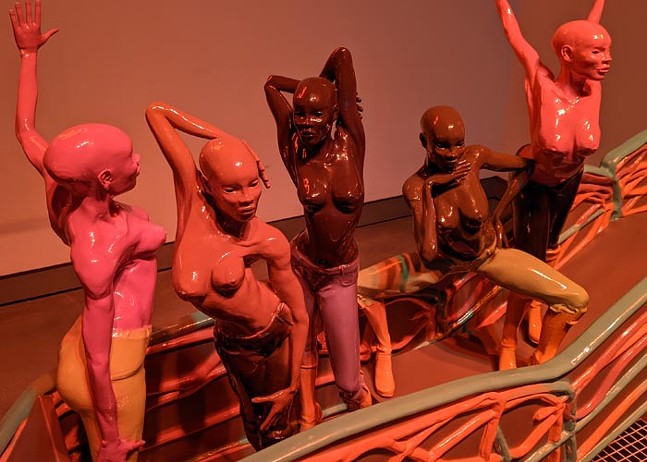 CP Photo: Amanda Waltz
“Room for Cleansing,” part of Spirits Roaming on the Earth at Miller ICA
Here, children of the ’90s are treated to snippets of familiar imagery, including clips of The Jerry Springer Show, a young Jim Carrey performing on the sketch comedy show In Living Color, and the music video for “Firestarter” by the influential British EDM band Prodigy. Even as the videos lull you into a retro fantasy, however, there are moments when you’re jarred back to reality, primarily when one video zooms out to reveal a digital flower display made in tribute to Breonna Taylor, a Black Kentucky women whose death at the hands of police added to calls for reform nationwide.

Dara Birnbaum: Journey goes from advent of TV to fringes of the internet