Spend 90 minutes in 1964 with Cassius Clay, Malcolm X, Jim Brown, and Sam Cooke in One Night in Miami 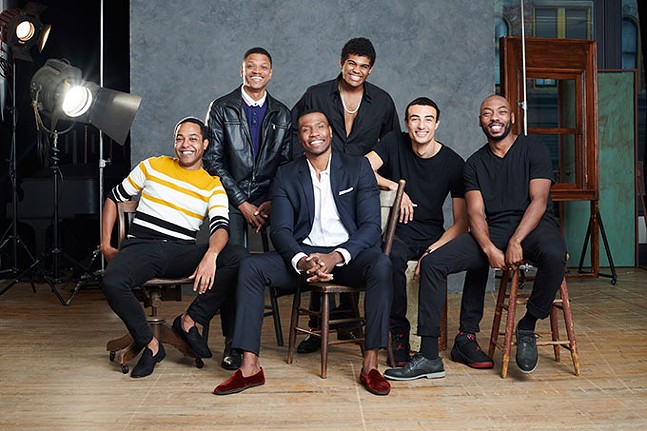 Don't beat yourself up if you assumed the premise for One Night in Miami was a work of fiction, or at least, seriously embellished. It's the stuff of a heavy-handed historical novel: In February 1964, 22-year-old Cassius Clay celebrates a huge victory over Sonny Liston at a hotel room in Miami with his friends Malcolm X, Sam Cooke, and Jim Brown. Yes, these four were actually friends, and this night actually happened, but as the program explains, "outside of those four men, no one knows the conversations that were had that evening, but one can imagine that they were momentous."

With City Theatre's production, penned by Kemp Powers in 2003, directed by Reginald L. Douglas, the conversations are definitely momentous, but also hilarious, tense, and affectionate. In the confines of Tony Ferreiri's wonderful set — a single-bed suite with a kitchenette, windows looking out into the hallway where two of Malcolm's security guards stand watch — the four men waste away the hours volleying arguments about Islam, alcohol, Bob Dylan, women, and the music industry. They also eat ice cream.

Everybody has a lot to say, as each is wrestling with pivotal life and career choices. Clay (a magnetic Thomas Walter Booker) is a rising boxing superstar on the heels of his Liston knockout and plans to announce his conversion to Islam and name-change (first to Cassius X, then Muhammad Ali). Brown (Quincy Chad) is coming to terms with the imminent end of his NFL career and eying a move to Hollywood. Cooke (Dwayne Washington) is at the height of his career, with his self-formed record label and publishing company. Malcolm (Avery Glymph) is in the midst of breaking ties with the head of the Nation of Islam and mulling his next move.

With these men's well-documented fates hanging over every conversation — the presence of the two security guards outside (Lamar K. Cheston and Brenden Peifer) is a particularly unsettling visual omen — Powers' script pulls off the unlikely trick of stripping the men of their celebrity and ego and letting camaraderie and affection power the actors' chemistry. They may be discussing career moves, but there's a busy subtext bubbling underneath all their interactions, namely the challenges of being young, successful, prominent Black men in America in the 1960s. Few but the four men in the room know the struggles, fear, and guilt that comes with that burden and you can tell they're all happy to have friends to commiserate with.

Portrayals of Black male friendship are seldom this nuanced, vulnerable, and loving, so it's fitting that Douglas calls the play a "love letter to Black men and a celebration of all our differences, perspectives, and opinions." There is no shortage of horror and heartbreak foreshadowed in the characters' words, but it's the warmth captured between these friends on this night that shines through the brightest.