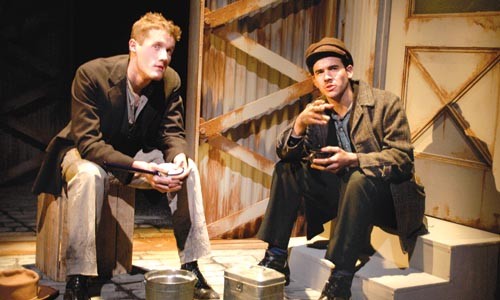 It can be difficult for a non-Pittsburgher to appreciate the anger and generational memory of what happened in Homestead in 1892: the work stoppage; the steelworkers' victory over the Pinkertons and subsequent subdual by the National Guard; the ultimate breaking of the local union in particular and derailing of the national labor movement in general. Not to mention the broken limbs and lost lives.

Where I grew up, not all that far from the site, the incident was still referred to as the Homestead Massacre. I have a friend -- an artist whose great-grandfather was among those steelworkers -- who still refuses to set foot in any museum associated with steel mogul/strikebreaker Henry Clay Frick.

Playwright Eric Simonson gets it. His City Theatre world premiere, Speak American, is set in a Homestead whose psychological and social wounds are still raw and oozing in 1904. The title refers to English-language classes that the company half-heartedly offers to the polyglot Eastern European immigrants recruited to work in the mill. But the expression itself is slang for the assimilation process. And Simonson does not portray it with nostalgia.

Speak American is not a history lesson, though Simonson (also the director) has cred as an Oscar-winning documentary filmmaker. The anachronisms don't matter in creating believable characters: the young Pole (Nicholas Ducassi) who dreams of a farm; his Slovak friend (a boyish Chase Newell) who dreams of a butcher shop; and his drunken uncle (the always able John Shepard) and sullen co-worker (Mark D. Staley), who have no dreams left.

The story revolves around the unlikely romance of the progressive-minded schoolteacher fallen from the upper caste (a spirited Daina Michelle Griffith) and a hard-eyed Bulgarian (the dashing Christopher McLinden). But the acting honors go to David Whalen, so successful elsewhere as a romantic lead, but here against type as the despised "company man" who seems powerful, yet proves hollow.

Tony Ferrieri's realistic yet evocative steel-mill set is augmented with a variety of historic photos and films, plus the lighting design by Andrew David Ostrowski. The Bulgarian, Polish and Slovak dialogue, translated into R-rated English displayed above the stage, blends well with Elizabeth Atkinson's soundscape. (Kudos also to dialect coach Don Wadsworth.)

At heart, the play is not just about Homestead. Americanization means ambition and hard work, yes, but also compromise and even betrayal. The struggle for survival does not have room for personal integrity.