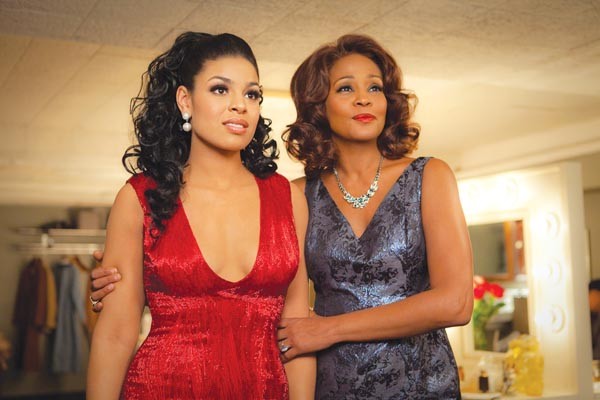 Not so shiny: Momma (Whitney Houston, right) counsels her daughter Sparkle (Jordin Sparks) on the road to fame.

Beware the siren call of fame. Though it may bring you prettier dresses, it will surely drive you into the arms of a bad man, poison your body with drugs and tear your church-going family apart. I know this is true because I have seen at least two dozen films laying out that cautionary tale, now re-told in Sparkle, a remake of the 1976 film.

Directed by Salim Akil, Sparkle is set in 1968 Detroit, and follows an aspiring girl group. Sister (Carmen Ejogo) is a slinky torch singer, already bitter and cynical; she's backed by her younger siblings — Dolores (Tika Sumpter), on her way to med school, and Sparkle (Jordin Sparks), the naïve good girl, who has a gift for writing uninspired pop songs that everyone raves about. The group gets a manager (Derek Luke), and Sister gets a new man, a sharp-tongued comedian named Satin (Mike Epps).

Everything's going great — the women's wigs are getting bigger, their dresses shorter — but their momma (Whitney Houston) is no fan. There's a vague backstory about her own failed singing career. ("I've passed out on the floor a few times, sure … but you never saw me lying in my own vomit" may be the greatest unexplored throwaway line in the history of entertainment melodrama.) Momma is bitter and angry, and no daughter of hers is gonna be a singing sensation: "You leave my house, there's no coming back."

Sparkle is a thinly written collection of tropes from every other rags-to-riches-to-drugs-to-redemption entertainment tale, juiced up with musical numbers. It should be a campy hoot, but Akil hasn't a clue how to play the melodrama, spinning too much of the film out as an inspirational Lifetime feature.

And even as worn-out as Houston looks and sounds here, she still runs rings around Sparks in every way — from her crowd-pleasing, eyebrow-arching portrayal of a mean momma to her gift for belting out a tune. (Sparkle doesn't demand much emotional involvement, but in watching Houston's portrayal, it's impossible not to see the late singer's own real-life struggles.) Sparks is fresh-faced and can sing, but she's no actress — and her character remains mostly a plot device, despite the top billing. When Houston wasn't stealing her lunch, Ejogo as the troubled Sister was taking her dinner.

By the film's big finale, Sparkle seems to have given up any pretence of being a period film, with a very contemporarily styled Sparks giving the full Mariah to an R. Kelly number. But the screening audience loved it, cheering for Sparks when she hit the big notes. It's not likely this film will make her a huge star, though … and given what we've learned, maybe that's a good thing.