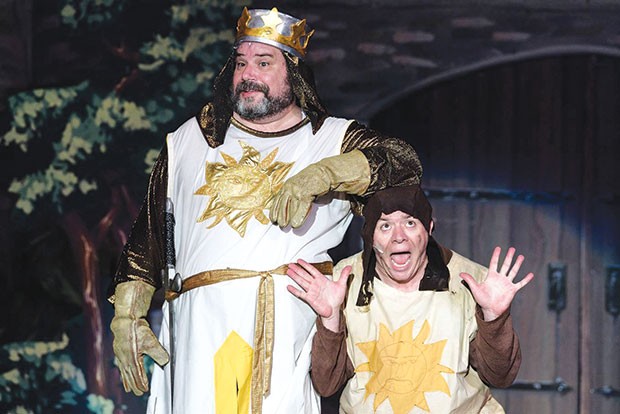 If you’re in need of a fun night out to help you look on the bright side of life, then search no further than Monty Python’s Spamalot, now playing at Stage 62. “Lovingly ripped off” from Monty Python and the Holy Grail, this 2004 musical follows the exploits of a buffoonish King Arthur (a pitch-perfect Rob James) and his ragtag team of unlikely knights. With book and lyrics by Monty Python regular Eric Idle and music co-written by Idle and John Du Prez, the show, which is sure to please fans of the source material, adds just enough panache to the familiar storyline to make it more than worth the price of admission.

Under the direction of Becki Toth, the cast is superb, with most of the performers assuming the Python tradition of playing multiple roles. In addition to James as King Arthur, other standout performances come from Carl A. Hunt as the put-upon yet loyal Patsy, Jeremy Spoljarick as the violent and valorous Lancelot, and Chad Elder who seamlessly doubles as both Galahad and the Black Knight. And in a production awash with male leads, Stephanie Ottey offers a much-needed female voice as The Lady of the Lake, delivering her show-stopping songs with equal parts soulfulness and sass.

For Python fans, the show is exactly what you would expect: silly, frenetic and often bawdy. All of the favorite numbers from Holy Grail have been co-opted for the show, including the Plague Village, the French castle and the Killer Rabbit. Of course, for those who never found Monty Python to be their particular cup of tea, then this fast-paced, episodic musical might not be the order of the day. But let’s face it: Who among us can really resist cracking a smile over that Killer Rabbit (which in this version is played by a red-mouthed hand puppet)? For anyone who enjoys their musical numbers over the top and their humor irreverent, Monty Python’s Spamalot is a rollicking good time.

Peter and the Starcatcher at Stage 62

The Music Man at Stage 62