“I think it’s an important point in time in human history to reflect on Marx.” Next week would’ve marked German philosopher and political theorist Karl Marx’s 200th birthday. Marx’s theories were the foundation for communism, which calls for the redistribution of wealth and the end of social class. They’re especially timely in the current political climate as many wrestle with how best to address the social inequalities currently facing the United States and other countries around the world.

Marx@200, a new exhibit inspired by Marx’s 200th birthday, furthers discussion of these ideas. The exhibit at SPACE features works by more than 25 artists from around the world.

“I’m certainly not a Marxist myself but I’m interested in the idea of class in general and emancipation which is something Marx strongly believed in,” says Tavia La Follette, one of the artists whose work is included in the exhibit. “It was an opportunity to create a work around these ideas.”

“I wanted something that was sort of more of a rumination on Marx and society,” says La Follette, a former smoker.

La Follette made a stamp with quotes from Das Kapital and stamped rolling papers with the text. She then hand-rolled the cigarettes and sent them to people she knew who still smoke.

“My greatest thinking was done while smoking. Just rolling the cigarette itself was a meditative process,” says La Follette. “So I sent these tins around the world and people ruminated on Marx. I asked them to go to a site where they could smoke. We had people smoking from Siberia to San Francisco, people smoking Marx.”

The people who received La Follette’s cigarettes — Peter Stokkebye Premium Turkish tobacco wrapped in pure hemp rolling papers — were asked to film themselves smoking and send the recordings to her.

Many of the pieces in the exhibit are blunt in the way they seem to support Marx’s ideas on wealth redistribution and elevating the working class, while others are subtler, inspiring viewers to contemplate Marx’s theories without telling them how they should feel. But overall the exhibit carries an overwhelming feeling that exploring Marx’s life and work can help us better understand the current state of social inequality and figure out how to change it. 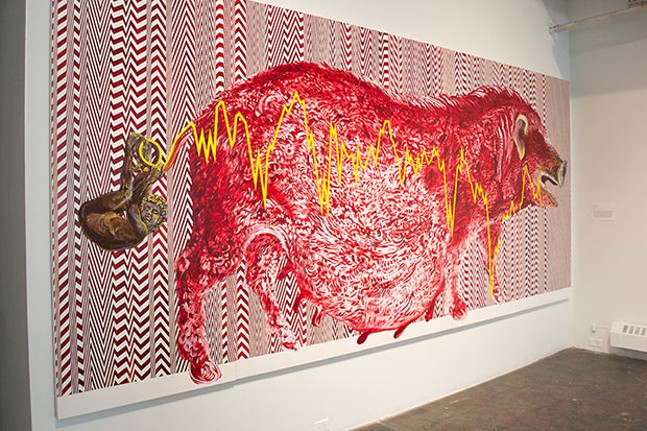 “It’s an important time for us to be thinking about our disposable culture,” says La Follette. “I have faith. I had faith in the Occupy movement. I have faith in the Black Lives Matter movement. There’s all these little fires being lit up all the time. If we can rage that fire a little more, there’s hope for us.

“We have to change. We can’t keep going on the way we’re going on. I think it’s an important point in time in human history to reflect on Marx.”

And if La Follette’s installation is any indication, people are doing just that. After just a few weeks, all of the cigarettes on display as part of her work are gone.

“I was amazed at how quickly all the cigarettes disappeared,” La Follette says. “I’m going to have to send more to SPACE.”

Tours conducted by the curators of the exhibit are available every Saturday at 11:15 am. To register, email knewman4@gmail.com.