Sowing the Seeds: Can Obama's grassroots campaign deliver like it did in '08? | News | Pittsburgh | Pittsburgh City Paper

Sowing the Seeds: Can Obama's grassroots campaign deliver like it did in '08?

"In a close election, our grassroots infrastructure will ultimately make the difference in November." 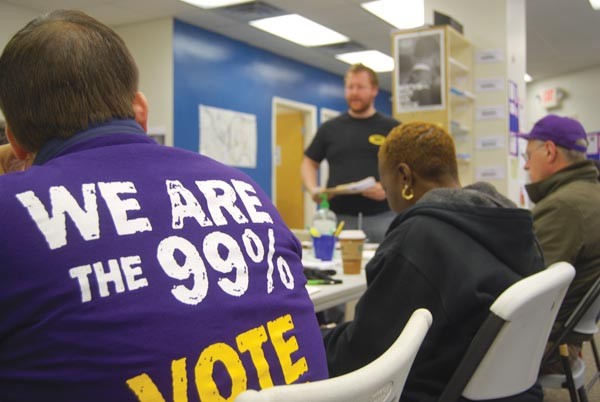 Joseph Lewis was looking mighty happy for a guy who was about to spend the next three or four hours walking around in the rain.

The Penn Hills neighborhood team leader for the Obama for America campaign was in East Liberty on Oct. 6 canvassing neighborhoods, talking to potential voters and making sure they were registered to vote. He wasn't involved in the campaign four years ago when Barack Obama was delivered to the White House on the shoulders of an energized base of grassroots volunteers — many mobilized by the ideas of hope and change.

Lewis still buys into the concepts of hope and change, but he's also a little pissed off.

"It's unpatriotic and I became infuriated at what I was seeing. That's why I'm here today."

He's not alone. They may be out here for different reasons but the several dozen volunteers that packed into the South Highland Avenue Obama campaign office on this cold, rainy morning have one objective — to get the president re-elected.

Much was made of the importance of Obama's ground game in 2008, when he ran a wide grassroots campaign of energized volunteers, a strong voter-registration drive, a well-built social-media strategy and a significant influx of contributions (many in small amounts from individuals). But this time around, Obama can no longer play the role of the political outsider bringing hope to Washington.

He's the incumbent now. He has four years of policies — both successes and failures — to defend. From the killing of Osama bin Laden and the passage of the Affordable Care Act to the federal stimulus plan and his failure to close terrorist prisons at Guantanamo Bay, this is a different Barack Obama.

But despite all of that, the Obama organization has been resolute in running the same type of campaign — a ground-up approach that begins with a mobilized group of volunteers and not an overabundance of spending on television, radio and newspaper advertisements. The grassroots campaign this year, the Obama camp says, is far bigger than the one in 2008.

"We have always believed that in a close election, our grassroots infrastructure will ultimately make the difference in November," says Matt Mittenthal, spokesman for Obama's Western Pennsylvania effort. "In the week before the first presidential debate alone, our volunteers registered more than 130,000 voters and contacted millions of voters in the battleground states, reflecting the incredible enthusiasm for President Obama among his supporters."

Mittenthal says the campaign has opened 44 offices in the state so far, with more possible. The campaign has received more than 10 million grassroots donations in 2012, and 98 percent of those, Mittenthal says, were $250 or less (the average donation was $53). Also, nearly 600,000 Americans have donated to a political campaign for the first time. That's up from about 370,000 first-time donations at this time in 2008.

Campaign officials say such numbers show that Obama's support base from 2008 has returned. And if it that infrastructure worked once, it can work again. In an email to supporters last week, campaign manager Jim Messina wrote:  "Day in and day out, what gives the President confidence and inspiration is knowing that you have his back."

"We've got his back," reads the text of the black-and-white poster of President Obama, that features a photo of the president shot from behind with a hand on his shoulder. The picture sits prominently over the left shoulder of volunteer team leader Matt Phillips as he instructs a group of volunteers — most from labor union SEIU —  about how to conduct the door-to-door canvass they're about to embark on. Currently he's instructing volunteers on how to handle an encounter with a voter who turns out to be a supporter of Republican Mitt Romney.

"You're not going to win that fight," Phillips tells the volunteers. "You can hit five more houses in the time it takes you to have one long, drawn-out discussion with a person whose mind you're not going to change anyway.

"But if someone tells you they're not sure who they're going to vote for, then ask what issues they're bothered by and then tell them why you support the president. Tell them why you're outside today in the cold and the rain."

The goal of the canvass has been multi-faceted, Mittenthal says. The point is to firm up the base of voters already identified as Obama supporters; to convert those who may be on the fence; to recruit more volunteers; and to make sure that any potential voter is registered.

On this day, there were just three days left to register voters for the November election. In 2008, the campaign excelled in getting voters registered and new voters came out for Obama then they did in any previous election. There have been reports that Democratic voter registration has been down across the country, but Pennsylvania, while down, is still running fairly even to 2008 numbers.

In 2008, there were nearly 4.5 million Democrats registered across the state. According to state registration records as of Oct. 1, there are 4.2 million registered Democrats — before the Obama campaign's final push of the past 10 days. More than 300,300 new voters have signed up as Democrats, compared to 260,700 new Republicans voters.

In August, the Washington Post reported that Obama's campaign workers on the ground led Romney's by a 3-to-1 margin. Obama has funneled nearly $50 million, the Post reports, to state committees to hire staff and open campaign offices in swing states, compared to $8 million by the Romney campaign.

But the Republicans are at least trying not to seem fazed. Rick Wiley, political director of the Republican National Committee, told the Post: "The Obama campaign is quick to tout how many people they have on payroll, but they don't seem to be doing anything."

And RNC chairman Reince Priebus told Capitol Hill publication Roll Call: "I find all of their ground-game talk to be garbage. They've got a decent ground game but they over-hype it so much."

But Mittenthal says the proof is in both the fundraising numbers and the sheer volume of events held by the Obama camp in Pennsylvania, a state that lost its swing designation by political pundits in recent months. Over the weekend, there were 500 events posted on the campaign's website, all happening within a 40-mile radius of the city. Mittenthal also pointed out that the Romney campaign website "appears to have no events scheduled for the Pittsburgh area." 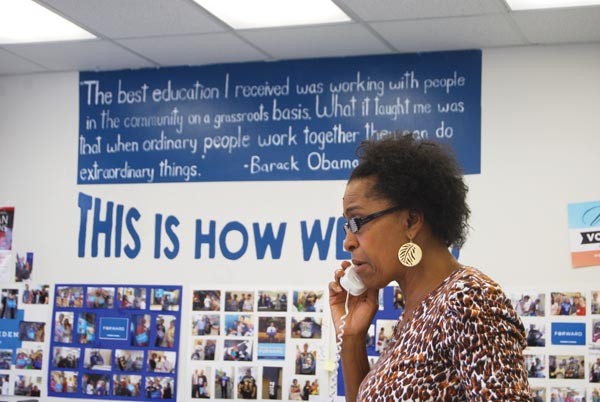 Phillips, who was in his early 20s when he volunteered for Obama in 2008, says there's has been change in the Obama grassroots effort. He says things "are much more organized this time around, much more efficient."

That certainly wasn't the case on Oct. 6. Shortly before 10 a.m. the office seemed to erupt in an organized chaos of volunteers coming in at once, getting their campaign materials — maps, commit-to-vote cards, etc. — and heading out into the streets. By 10:15, the office was calm again with little more than the sounds of two phone-bank volunteers making calls and Phillips instructing the first-timers. Across Western Pennsylvania, Mittenthal says, hundreds of volunteers logged 2,400 hours campaigning this past weekend.

The scene was similar at a campaign hub on West Liberty Avenue in the South Hills. The goal was to knock on 1,000 doors through the South Hills neighborhoods. In the office, meanwhile, first-time volunteers intermingled with veteran campaigners like Donna Grandinetti, learning the ropes of phone-banking or door-knocking. When Romney supporters were reportedly spotted canvassing, volunteers moved with even more haste to start their canvas.

"It's not different than 2008. There is still this energy," says Grandinetti, a volunteer team leader. "The country has a lot that needs to be done; you can't clean it up in three years."

Ninamary Langsdale, of Mount Lebanon, a lifelong activist, volunteered with Obama in 2008 and is clocking nearly 50 hours a week volunteering this time.

"It's different because when people were campaigning last time, it was almost easy. Everybody knew there had to be a change. People saw their 401K's halved. People were out of work. People were frightened," she says. "It was exciting to volunteer because [campaigners] felt as if they were taking control of something in their lives."

But the dedication of the grassroots workers to the campaign "is tremendous," she says as she passes off a cell phone to an 84-year-old, first-time phone-bank volunteer. And this year, "volunteers are more courageous," she says. "They know that not everyone they speak with agree with them or say, ‘Yeah, he needs another term.' But they're still optimistic."

Even if the infrastructure of the grassroots campaign is improved upon over the 2008 effort, G. Terry Madonna, director of the Center for Politics and Public Affairs at Franklin and Marshall College, says there are a lot of intangibles from that campaign that can't be duplicated.

"The ground game of that 2008 campaign was one of the most underreported stories of that election cycle," Madonna says. "You will never have the same level of enthusiasm this year that you did in that historic election of '08.

Where the solid ground game will help Obama, Madonna says, is in the get-out-the-vote efforts.

"There's a relatively small pool of undecided voters out there this time around," he says. "And that puts a premium on efforts to make sure your supporters actually come out and vote.

"That could be a huge factor, especially if the race starts to narrow."

"This time around we're basically talking with our voters," Phillips says. "The most important thing we can do is work to get out the vote."