“Without the Pittsburgh market’s support, we wouldn’t be the brewery we are today.” 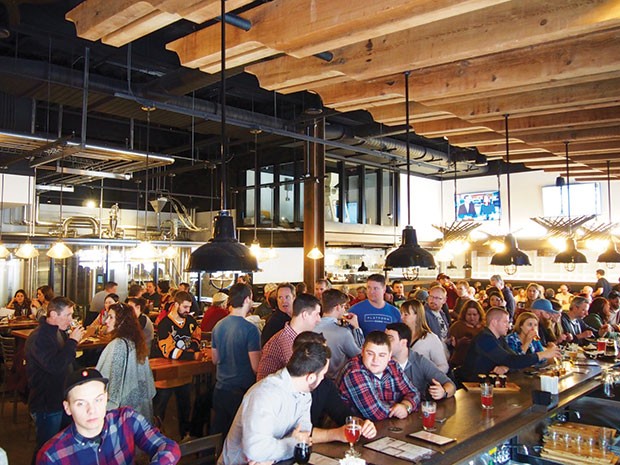 Now that football season is over, it’s time to count down to opening day at PNC Park. And if you plan on catching a game this season, but the idea of paying nine bucks for an I.C. Light doesn’t sit well, you’re in luck. There are more nearby options than ever, including recent additions like The Foundry and Local Brewhouse. And after months of anticipation, Southern Tier Brewing Company has joined the fun, giving Pittsburghers new access to an already popular brand.

“It made sense for us to find a space down here,” says head brewer David Harries, nodding to the city’s well-established relationship with the Lakewood, N.Y., brewery. “Without the Pittsburgh market’s support, we wouldn’t be the brewery we are today.” With its central North Shore location, the new brewpub will undoubtedly appeal to visitors as well. “We’re able to now have the chance to reach people who come here for a Pirates game or a concert or a football game,” notes Harries. “It allows us to reach people who wouldn’t ordinarily come to Lakewood.”

The Pittsburgh location, which opened in late January, offers that experience in an attractive package. Reflecting the aesthetic of the Lakewood brewery, the space is filled with natural wood, and chandeliers made from old barrel staves. Thirty taps line one wall, serving up Southern Tier’s signature hop bombs and dessert beers as well as a few offerings from Victory Brewing (its sister brewery under holding company Artisanal Brewing Ventures). Eventually (hopefully by opening day), the brewpub will boast a beer garden, more than doubling its capacity.

But the focal point is undoubtedly the gleaming new Steinecker Krones brewing equipment. The 8.5-barrel system will allow Harries to brew pub exclusives, as well as pilot test batches that could make their way to Lakewood for larger-scale production. Though none of Harries’ beer is currently on tap, he’s got a blonde ale, an oatmeal porter, an English-style bitter and an IPA in the fermenters. When those beers go on draft (within a month, Harries hopes), they will be piped directly from the serving tanks, guaranteeing the freshest possible beer.

I stopped by for lunch on a busy Saturday afternoon. The menu, populated with game-day favorites like smoked wings and a pastrami Reuben, was well executed and reasonably priced. The beer selection was equally impressive, ranging from standards like 2XIPA to one-offs like Pittsburgh Speed Date (a winter warmer brewed in collaboration with more than two dozen local brewers). But above all, Southern Tier wowed with service. Though the pub was busy and chaotic (and likely to remain so for quite some time), the service was warm, friendly and attentive.

That’s no accident. “We want to make high-quality beer and food,” says Harries. “But at the end of the day, the name of the game is hospitality: making people feel welcome and comfortable.”