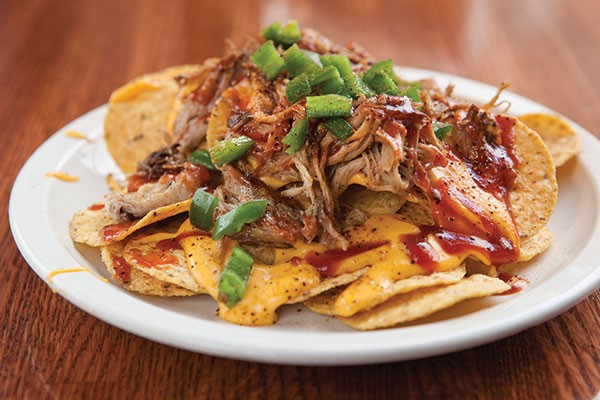 On the face of it, the replacement of the South Side's venerable 17th Street Café with a new barbecue place isn't that remarkable. There's been plenty of turnover in the South Side dining scene in recent years, and even established restaurants are far from immune

But 17th Street Café did not go out of business; it was re-conceived with a new concept by the same owners, a fact that speaks to more than an older restaurant quietly closing. The opening of South Side Barbecue Company highlights several current trends in the Pittsburgh dining scene: the fading of old Pittsburgh tastes, the detailed exploration of particular cuisines and, of course, the rise of food trucks as incubators for new experiments in local dining.

The night we visited, 17th Street was crowded with three food trucks: one from South Side Barbecue Company itself and two associated with nearby Nakama. Moreover, a mere half-block away was Cambodican, the bricks-and-mortar successor to one of the city's first really well-known trucks. SSBBQ also started with a truck, the so-called CarnivoreMobile. Once its reputation and clientele seemed secure, owners Pat and Mike Joyce shut down the 17th Street Cafe, which they had run with a traditional Pittsburgh menu (fried zucchini, wedding soup, pasta and steak) for over a decade, and rededicated the restaurant to barbecue.

Of course, barbecue itself is not a new trend, but until recently the local offerings were mostly pretty mediocre: meat smoked and then slathered in thick, sweet sauce that hid the merits of the beef, pork or chicken. With the rise of a new food culture and the arrival of more transplants from barbecue-centric regions, we've seen a number of more authentic barbecue joints open up, many offering a smorgasbord of sauce styles. But the Joyce brothers have staked out a firm preference for simplicity by offering just two sauces — hot or "not." We found both versions excellent, the hot fiery but not punishing, the "not" mild but not bland. Neither one was cloyingly sweet or overly thick: They coated, but didn't smother, the meat.

Which was a good thing, because the meat, for the most part, was excellent. Wings — enormous ones, grilled — were infused with wonderful smoky flavor, and their ample size offered enough meat to stand up to the sauce. St. Louis-style ribs were served at that sweet spot where they released from the bone but still retained some meaty chew, and the kitchen finished them with just enough sauce to flavor the meat. (More sauce is available on the table.)

Chicken could also be had pulled, but the smoke was less apparent in that form. The pulled pork could also have stood a bit more smoke, but it was hard to find fault in the meat itself, which had been shredded just right to provide tenderness interspersed with occasional larger, meatier chunks. Served on a big, brioche-like roll with North Carolina slaw, it made for an excellent sandwich, or "sammy," in the menu's parlance.

The one failed meat, alas, was brisket. Inexplicably, it was gray, sliced thin like deli meat, and neither moist nor flavorful.

Sides were a mixed bag. The aforementioned North Carolina slaw was a crisp and vinegary mix of finely chopped cabbage and carrots with a more complex profile than a lot of one-note vinegar slaws. Baked beans, in a relatively thin, tomato-forward sauce, were smoky, a touch spicy and not at all sweet (which is a good thing in our book). But the cornbread had the moist, dense crumb of pound cake, and while Jason thought it was better than the sweet, muffiny stuff that is so prevalent in Pittsburgh, Angelique couldn't get past that texture. Meanwhile, it was a bit hard to judge the pepper-jack mac-and-cheese in the bottom of the bar-b-cone, but our impression was solidly middle-of-the-road.

Bar-b-cone? After hearing what it was, we had to order one: a waffle cone filled with a layered sundae of mac-and-cheese, pulled pork and North Carolina slaw, all topped with sauce. The individual ingredients were good and in combination, they were great, but we found the cone an unnecessary stunt. The layered construction within favored eating the ingredients one at a time; the sweetness of the cone itself was more suited to its traditional filling of ice cream than to savory barbecue; and its waffly crispness quickly became unappealingly soggy.

The 17th Street Cafe had its day, but we applaud the Joyces for realizing that today belongs to regional and international cuisines, interpreted with a balance of innovation and authenticity.