It's an easygoing comedy mystery thriller 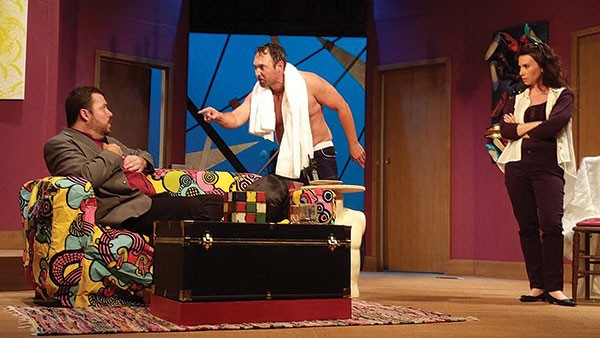 Photo courtesy of South Park Theatre.
From left to right: Dave McDonald, Dan Bisbee and Ivy Steinberg mix it up in The Art of Murder.

THE ART OF MURDER

Playwright Joe DiPietro leads something of a double life. On one hand, he is the book writer of several big New York musicals: I Love You, You're Perfect, Now Change; All Shook Up; Nice Work If You Can Get It; and Memphis. (He won a Tony for the latter.)

On the other hand, he writes community-theater staples — small shows about simple people doing mundane things. In this category we find The Last Romance and the hugely popular Over the River and Through the Woods.

South Park Theatre presents DiPietro's The Art of Murder — decidedly not one of his Broadway outings. Here DiPietro has set out to write a genre play, specifically a comedy mystery thriller.

We're in the home of hugely successful artist Jack Brooks, who also happens to be a flaming idiot. (Dan Bisbee gives a quite energetic performance in the role.) Brooks lives with his doormat of a wife (Ivy Steinberg, playing it curiously low-key). And here comes Jack's outrageously hateful art dealer (Dave McDonald, making the most of the comedy). In the way of these things, somebody is going to kill — or try to kill — somebody else, and we're supposed to figure it out.

It's not entirely DiPietro's fault that he's writing in a limited, and limiting, genre where it could be said that the most technically proficient and theatrically successful examples have already been written: Gaslight, The Mousetrap and the gold standard, Deathtrap. So if DiPietro's attempts feel like a bit of a retread ... well, I think most playwrights would face that same problem.

Director Cindy Swanson could drive the pace a bit more; long pauses between lines — never a good idea — are deadly to a thriller. And a more uniform acting style from the company could help smooth over some of DiPietro's rougher patches. Amber Kocher contributes a lovely set design.

There's nothing terribly wrong with The Art of Murder; it's an easygoing sort of play that, whatever its faults, takes up two very short acts. If you're a fan of the genre, you might notice the sketchy plotting and obvious set-ups. But certainly the South Park Theatre audience was there for a good time, and by the end they'd had just that.