A classic gets a most enjoyable production 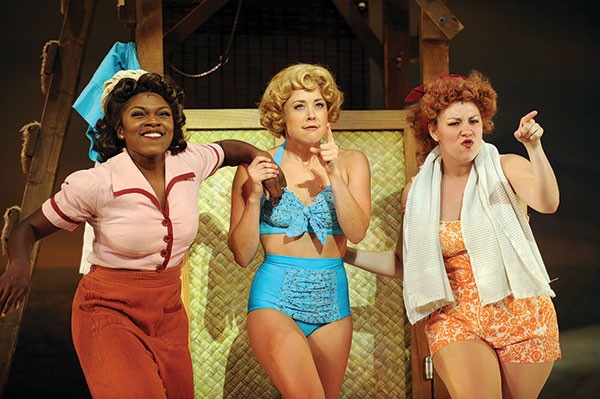 continues through Aug. 14. Pittsburgh CLO at the Benedum Center, 237 Seventh St., Downtown. $25.75-85.75. 412-456-6666 or pittsburghclo.org
A bright, shiny but very tuneful bauble — Pittsburgh CLO serves up a most enjoyable production of South Pacific. The 1949 Rodgers-Hammerstein multi-award-winner lives up to the definition of “classic,” with most of its songs now popular standards. And the CLO lives up to its reputation for great voices, lovely sets and enthusiastic dancers.

Who can possibly resist the wooing of leading man Ben Davis in “Some Enchanted Evening”? Or be unmoved by leading lady Erika Henningsen’s joy in “I’m in Love With a Wonderful Guy”? And the hits just keep on happening: “There Is Nothing Like a Dame,” “I’m Gonna Wash That Man Right Outa My Hair,” “Younger Than Springtime” and many others, notably the evocative “Bali Ha’i.” Director Linda Goodrich harnesses a wealth of performing and design talent and energy to keep the dust off what could too easily be a period piece.

Background credits time: The World War II musical is based on James A. Michener’s Pulitzer Prize-winning 1947 collection of short stories, Tales of the South Pacific; music is by Richard Rodgers, lyrics by Oscar Hammerstein II, and book by Hammerstein and Joshua Logan, the show’s original director and (most usefully) a war vet.

In the post-Hamilton world of musical theater, South Pacific seems quaint, though it was quite a trailblazer in its day — even controversial, given its much-vaunted anti-racist theme. “You’ve Got to Be Carefully Taught” still carries some sting. That message is muted with CLO’s Navy decidedly (and admirably) less segregated than the U.S. Navy at the time. Here, that cock-eyed bigot Nellie Forbush evinces no problems interacting with most non-whites. And “Honey Bun,” a drag duet with Henningsen and the affable Genson Blimline, as chief petty comedy officer, is still hilarious if you don’t mind the cringeworthy caricaturization of indigenous peoples.

Alas, we too readily judge performance arts by modern standards, but accept the studio arts for what they are, e.g., “The Winged Victory of Samothrace” (c. 200–190 BCE). Forget the baggage of history. Take South Pacific for what it is: a valuable antique artfully preserved and presented with panache.