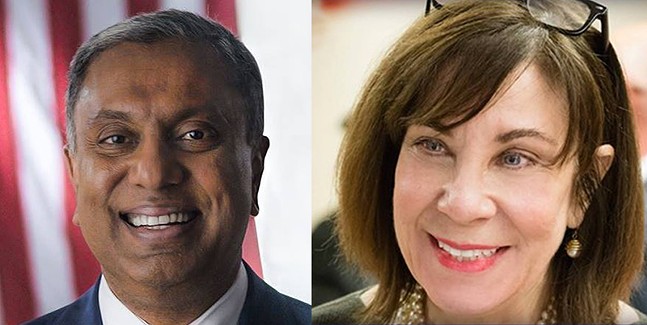 Republican D. Raja and Democrat Pam Iovino
The Pennsylvania state Senate has been in Republican control for more than 20 years. As recently as last year, the GOP had so much control, they held a super-majority that could have potentially overrode Gov. Tom Wolf’s veto.

But that tide could potentially change with a local special election on April 2. Democrat Pam Iovino is facing off against Republican D. Raja to fill a vacant state Senate seat for the 37th District, which includes much of the South Hills and the western portion of Allegheny County.

If Iovino were to win, it would give Democrats 22 seats on the state Senate, their highest number since 2014. Iovino would then face re-election in 2020, along with three other competitive districts currently held by Republicans in Erie, Dauphin, and Delaware counties. If Democrats win all those races, they would have 25 seats, with Democratic Lt. Gov. John Fetterman as the tie breaker.

“Looking at a statewide perspective, if the Democrats have a good year, they have a feasible chance to pick up the senate,” says G. Terry Madonna, political science professor at Franklin & Marshall College in Lancaster.

If Raja were to win on Tuesday and then again in 2020, it would almost certainly ensure that Republicans maintain control of the senate during the final two years of Wolf’s last term. Madonna says the Republicans understand this importance.

“I don’t think there is any doubt that their hold on the state senate is more concerning to them because of this race,” says Madonna.

The money pumped into the race indicates that both parties know how important it is. WESA reports that Raja has $1.2 million of his own money on the race, about 85 percent of all the campaign cash he has raised. Iovino has raised about $1 million, with PACs tied to Gov. Wolf supplying about half of that figure.

Iovino is running on support from organized labor, while Raja is touting his experience running a large software company. WESA broke down the races’ only debate, which provides more detail on the candidates stances on healthcare, the minimum wage, the environment, and recreational marijuana.

Come 2020, three competitive districts — 49 in Erie, 15 in Dauphin, and 9 in Delaware, are on the ballot. All were won by Republicans in 2016, but by less than seven percentage points. That is a smaller margin than former GOP state Sen. Guy Reschenthaler won District 37 the last two times he ran.

And while District 37 appears to be the hardest get for Democrats come Tuesday and then 2020, signs show the district may be shifting in a blue direction. Not only did U.S. Rep. Conor Lamb (D-Mount Lebanon) win in his special and general election in 2018, but he did so in large part by flipping the traditionally Republicans suburbs of Bethel Park and Upper St. Clair, both of which are in the District 37.

However, that Democratic shift might not be arriving just yet for state legislative elections. Both Republican state Reps. Valerie Gaydos and Natalie Mihalek won in districts overlapping District 37 in 2018.

For these reasons, Madonna says District 37 is one to watch. “The Allegheny County district could be instrumental,” he says.