"Research shows that students who are exposed to music education do better in other subjects." 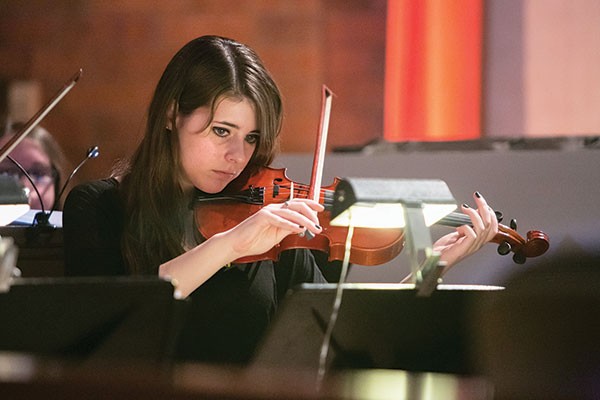 When Pittsburgh Public Schools parent Molly May testified at a public hearing in February, she used song to convey the importance of arts education in public schools.

"Where has all the music gone?" she sung. A former PPS music teacher who has also taught music in the Pine-Richland school district, May has been a champion for increased music education in the district.

"This wasn't the first time I have sung at the school board," May says. "And it won't be the last."

Around the country, finding funding for music education is difficult for urban school districts like Pittsburgh. Under Gov. Tom Corbett, education funding has dropped significantly; Pittsburgh alone has lost $27 million since 2010. These cuts, combined with the district's other budget restrictions, have left little room to increase music-education offerings.

According to figures from the district, in 2011 there were 68 teachers for all musical programs across the district including those teaching music at the city's Creative And Performing Arts High School. In 2013, that number was cut to 56, and in 2014 it was trimmed again, to 53 teachers. A breakdown of where and what courses those instructors teach was not available, nor were staffing levels before 2011.

"We've had all these budget cuts and our students have lost a lot of music and art education," says Jessie Ramey of Yinzercation, a member of the Great Public Schools Pittsburgh education-advocacy coalition. "The state is choosing to take money out of education, and the district has had to make some really tough choices."

District students in grades K-8 receive general music education once every six days. During this time they learn basic music skills, music history, critical analysis and music vocabulary, and receive hands-on experience with basic instruments. The once-every-six-days rotation for students in grades K-8 is far less than the three times per week recommended by the National Association for Music Education.

"Research shows that students who are exposed to music education do better in other subjects," Ramey says. "So this is one of those things that's a no-brainer. We've heard over and over again from parents who want art and music back in our classrooms."

While the music-education offerings are meager for younger students, opportunities expand once students enter fifth grade, which is when students can begin learning an instrument. In high school, music offerings include band, choir, orchestra and even guitar in some schools.

District representatives say its music program has actually improved in recent years. At one time, while some schools offered music education more than once every six days, others offered it less frequently, if at all. The district reorganized its resources for the 2012-2013 school year to ensure that each school was receiving the same level of education in music and the arts, and access to a librarian.

"This is an art city, and we know parents value having their kids have access to music and art," says Ebony Pugh, district spokesperson.

A graduate of CAPA High School, the district's arts-and-music school, May was fortunate to have music education as a primary component of her curriculum. But she says that because of limited music preparation, other students aren't afforded the same opportunity.

"It's unfortunate that now, more and more kids aren't going to get into CAPA," May says. "We have a lot of great programs in the city that are prohibitive for many families to send their kids there."

Students must audition to get into CAPA's instrumental-music program, but entry is tough unless the student already has a strong background with that instrument. Students apply to CAPA in the fifth grade, the first year they are eligible to receive instrument instruction at their schools. However, there are just four teachers available to give these lessons across 26 schools, and that limited instruction might not be enough to get a student past his or her CAPA audition.

But there are also alternatives for students wanting to learn an instrument. Last year, PPS launched the Summer Instrumental Jumpstart Program. The program gave students in grades 5-8 the opportunity to receive free music lessons once a week from July 15 to Aug. 9. There's also a Saturday program in partnership with the River City Brass Band at CAPA High School.

"There's no doubt we've lost some time with students because of budgetary cuts," says Angela Abadilla, senior program officer of arts education in the district. "But I'm always looking for ways to prepare them for their audition."

"The real question is how the instruction looks when it's delivered," says Christopher Woodside, assistant executive director of the National Association for Music Education. "It's not necessarily the shuttering of the program, but the hollowing-out of a program where teachers are getting far less access to kids."

The National Association for Music Education is working to appeal to state and federal legislators whom they believe have the power to increase funding for music education.

"We teach teachers to build coalitions, change the conversation, so when budget cuts need to be made, music and arts aren't on the chopping block," Woodside says. "We have the problem of music education being considered less than a core subject.

"Particularly in the city where resources are so limited to begin with, I think it becomes a foregone conclusion. "