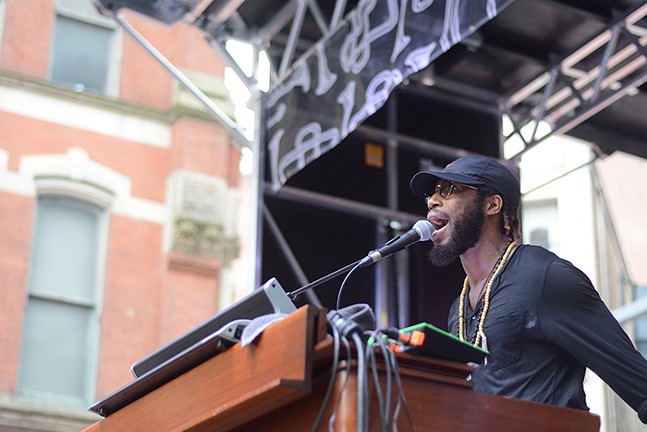 CP Photo: Mike Canton
Cory Henry & The Funk Apostles at the 2018 Pittsburgh International Jazz Festival
Preparing the year’s Top 10 Albums list is an exercise in reflection. It’s a time to rewind 12 months and recall what’s been good. For 2020, while still leaning toward full releases, there was increasing consideration of larger EPs.

Soulshowmike’s Album Picks has reviewed several of the selections over the past few months, so I’ll cover the others here. Black Light Collective delivers a ’60s/’70s jazz vibe. Their young vocalist, Isis Damil, is to be reckoned with. Fantastic Negrito is zany and vibrant, with Tank (of The Bangas) guesting. The Bangas themselves deftly move into more mainstream territory while remaining true to themselves. Cory Henry, former Snarky Puppy keyboardist, brings forth retro and social intent. Kassa Overall - listen to his nod to Joan Baez on “Show Me A Prison.” Pleasure, the Pacific Northwest funk fusion band, comes back stronger than ever.

Steve Arrington — Down To The Lowest Terms: The Soul Sessions

Black Light Collective — Black Light Collective
Fantastic Negrito — Have You Lost Your Mind Yet
Geenpool — In The Bleak
Cory Henry & The Funk Apostles — Something To Say
Bryony Jarmin-Pinto — Fish Factory Sessions
Brenda Nicole Moorer — Marrow
Kassa Overall — I Think I’m Good
Pleasure — Now Is The Time
Tank & The Bangas — Friend Goals
•  •  •
The Soul Show presented its Top 10 Albums on Dec. 26. Listen to the full broadcast in the archives section of soulshowmike.org.
Mike Canton is the longtime host and producer of The Soul Show on WYEP 91.3FM. He recently launched a syndicated edition of the program, now airing in three markets. Both are produced in his Electric Basement Studios. Canton is also a Pittsburgh-area voice artist.