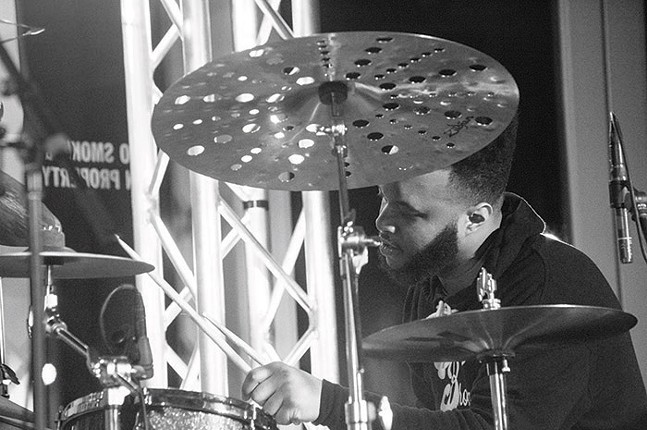 Photo: Mike Canton
Corey Fonville of Butcher Brown at the August Wilson African American Cultural Center in 2019
Sometimes music releases hit my radar a little later than they should. One reason is that terrestrial radio follows FCC permissible-language policies, and a new album might only have a few initial singles sanitized for the delicate ear. #KingButch by Butcher Brown is now fully ready, and was worth the wait.

Pittsburghers may have seen Butcher Brown at The Rex and, more recently, at the August Wilson African American Cultural Center. They are a Richmond-based fusion quintet. Drummer Corey Fonville is a standout member of the group, but everyone is tight. Saxophonist/trumpeter/MC Marcus “Tennishu” Tenney is front and center.

Butcher Brown’s discography includes both studio and live work. #KingButch, the band’s first major-label release (Concord) is a dive into the melding of jazz and hip-hop. There’s plenty with and without to satisfy everyone’s taste. Old schoolers, take note: Butcher covers “Tidal Wave” by Ronnie Laws.

On a separate note, Pittsburgh City Paper invited me to participate in this week’s Summer Guide, offering up some of my favorite tracks for the season. Why, yes! WYEP, my home base, has posted songlists for summer cruisin’ from time to time, and here’s my chance to offer an R&B perspective. The one caveat is that I will live in the Temple Of My Familiar.

Mike Canton is the longtime host and producer of The Soul Show on WYEP 91.3FM. He recently launched a syndicated edition of the program, now airing in three markets. Both are produced in his Electric Basement Studios. Canton is also a Pittsburgh-area voice artist.