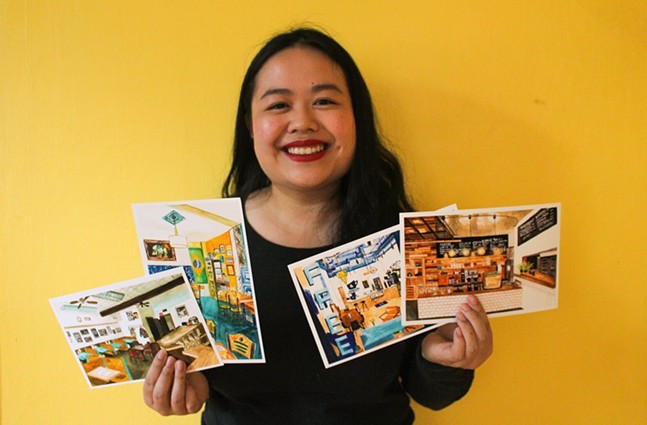 Photo: Sophia Fang
Sophia Fang with postcards from her Painting Main project
Artist Sophia Fang has become familiar with small businesses in Pittsburgh, both as a patron and as the head of marketing at Honeycomb. It was the latter, a company that provides crowdfunded loans to small businesses, that brought her to the city two years ago.

“I'm kind of a West Coast girl,” says Fang, a Seattle, Wash., native who attended college in California and currently lives in Shadyside.

Fang says Painting Main was inspired by her sense of longing for her favorite food and drink establishments shut down during COVID-19.

“It was sad to see so many empty storefronts,” she says. “Ordering takeout helps, but it's not the full experience, the sitting with friends, and the music and ambiance.”

The postcards come in various sizes and are priced from $4 or pay-what-you-can. Proceeds will go toward the highlighted businesses or to charities chosen by the restaurant or coffeehouse owners. 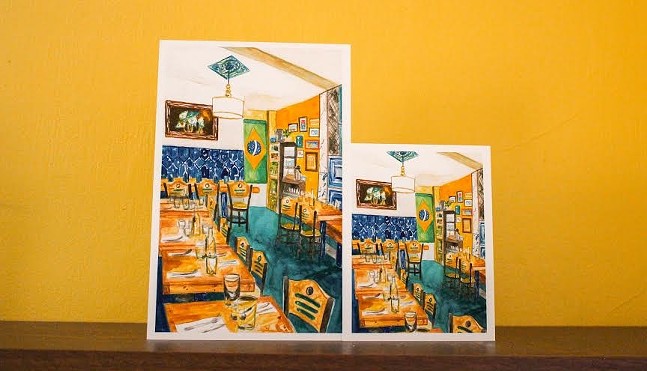 Photo: Sophia Fang
Casa Brasil postcards by Sophia Fang
Through her work at Honeycomb, Fang saw how the pandemic left local businesses struggling and wanted to do something to help. While the current series is food and drink focused, she plans on painting other types of small businesses, like art boutiques and pet stores. She eventually wants to paint businesses throughout Pittsburgh and create neighborhood-specific postcard packs.

Since it started on May 20, she says the project has raised over $500.

Fang believes the project highlights the importance of investing financially in small businesses as a way to “stimulate local economies.” She also wanted to “prioritize businesses that serve low-to-moderate income communities, are women/minority/immigrant-owned, or are newly opened, as they've been disproportionately impacted by the pandemic.”

It also serves as a reminder of how essential small businesses are to the fabric and character of a neighborhood. Fang points out how the businesses featured in the project tend to be “very community-minded.” For example, Nancy's Revival has been operating in Wilkinsburg since 1976 (formerly Nancy's Diner, it was bought and renamed by Revival Chili in 2019).

The other three businesses were chosen for what they bring to their respective neighborhoods — Ineffable Cà Phê focuses on Vietnamese cafe culture and food, Arriviste supports local artists with monthly gallery shows, and Casa Brasil hosts Brazilian music nights and other cultural events.

She points to the thesis of the project, which “seeks to celebrate small businesses not only as providers of much-needed services, but also as creators of essential thirdspaces where community love, cultural exchange, and precious memories are born.”

“I hope I can capture that a little bit on paper,” says Fang.