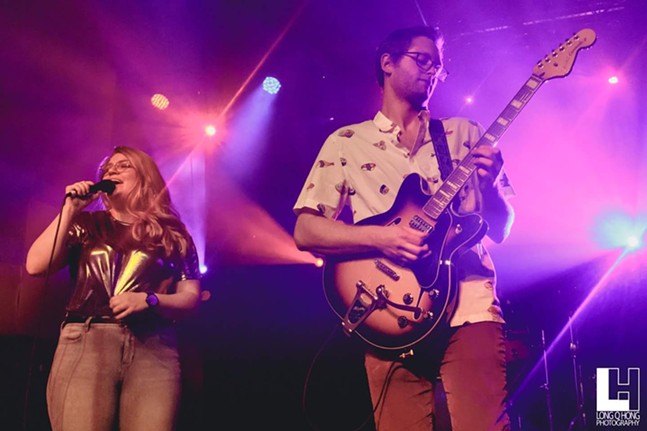 Cea Carlesi (left) and Stephen Conover (right)
Pittsburgh-based band Badluxe just released a new song four years after their last project. “Very Upbeat” dropped March 4, and is, as the title suggests, very upbeat. Badluxe is an alt-pop band with funk influences that you’ll feel throughout this song. Even the song cover art is funky, featuring a mulleted person surrounded by purple and pink with “Badluxe” scrawled in a retro, '80s font.

The track blasts you with a great beginning guitar riff, and that energy carries through to the end. Singer Cea Carlesi's vocals are at a high, pop-y register, but don't waver. It’s a very fun, seductive performance that definitely gets stuck in your head.

The lyrics of the single match its vibe, an energetic love song where you can feel the yearning in Carlesi’s voice, and in her words:

“Yeah I want it, yeah I want ya so bad, baby
And I’m so thankful, I’m so thankful for
What we have, what we have
I got my right foot down in the future
There’s no looking back
And I’m OK with that
You’re the one that I want to be with
I knew it from the jump
Since I met you, girl I’ve been in love”

Badluxe is woman and LGBTQ-led, so this song can be read as a love song between two women, not something I see often but always love it when I do. Pop-heavy love songs just make you feel good, and during this time, that’s something we all need. “Very Upbeat” is out now on all streaming platforms, and you can listen to it below on Spotify.