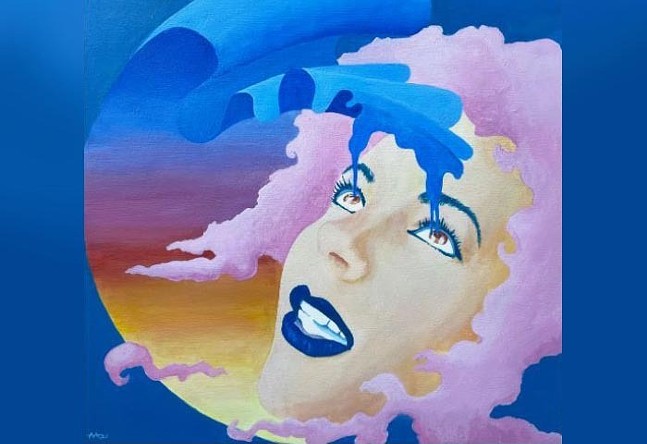 Artwork by Alberto Almarzo
Drink The Blue Sky by Nice Rec
If you are into music with few words, and heavy on the vibes, you’ll love the new album Drink The Blue Sky by Nice Rec. This entire album is dripping gold, with grooves that call to mind Khruangbin or NxWorries but with a more electronic flavor. The tracks that see Nice Rec collaborating with others like WesWill and Cam Chambers are soulful and full of slick lyrics and rhymes.

One of the shining jewels from the album is “Intertwined.” This track sounds like being beamed up to another dimension. With sultry keys and a climbing synth, “Intertwined” is funky and sonically complex. Like a sip of a good cocktail, it combines multiple elements seamlessly. The vocalizations on the track are soft and juxtaposed against the almost frantic electronic elements of the song's second half.

From the delicate twinge added to the keys to the high hat sound, “Intertwined” is a perfect blend of exactly what you want.

Nice Rec, the musical persona of Pete Mudge, has produced plenty of beats for other acts, including Wiz Khalifa, J.I.D, and the late Mac Miller. When announcing the Sept. 23 release of Drink The Blue Sky via Twitter, Nice Rec wrote, "This was always supposed to be an end of the summer album and i think it sounds like that."

I listen to music almost every second of the day, but especially when I’m working. This album is great to put on when you’re in the midst of a workday or driving home after putting in a long eight hours.

Drink The Blue Sky is available for streaming and purchase wherever you get your music.