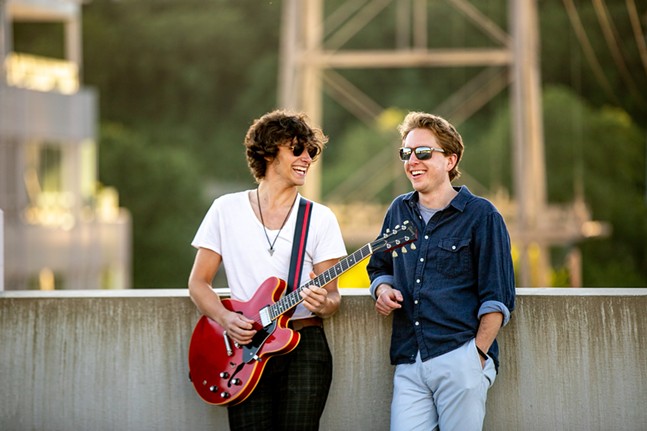 Photo by Kaycee Orwig
Jordan Schulz (right) and Zach Miller (left) of HIGHCLEAR
A bright, cheery love song, “Home” is perfect for summer barbecues and dances on your back porch. Performed by HIGHCLEAR, a band composed of vocalist Jordan Schulz and guitarist Zach Miller, “Home” is a simple arrangement that results in big sound and beautiful harmonies.

The song itself is about wanting to be a comfort to the person you love.

“I wanna feel like home to you
I wanna make that known
I wanna be your glass of wine
On a summer night on the porch.

Every late night weekend
When you’re out laughing with your friends
I wanna be that feelin
And I wanna be it til the end.”

Schulz's vocals are technically sound and smooth, giving the song a soulful quality though the overall effect is very pop-country. Miller's guitar adds a brightness to the track that makes it summery and fun.

The duo met in 2019, and "Home" came about after the two became roommates in 2021 and Miller approached Schulz with the idea for the song. According to the band's website, they initially never imagined themselves writing a song with country overtones, but as they built the song and played it in front of audiences to positive feedback, they grew in confidence.

“Home” is available for streaming on all platforms now.