Song of the Sea

Song of the Sea

Folk tales are meant to entertain, but also to convey necessary mores about family, life and death, living the best one can, and so on. Tomm Moore's new animated family film, Song of the Sea, an original contemporary fairy tale rooted in traditional Irish folklore, is no exception. It's a simple enough story for children, with plenty of colorful visuals to hold them, but one that is engrossing enough for adults.

The story concerns a fractured family, who live in a lighthouse near the sea. They are shut off from one another by grief, jealousy and pettiness: Widowed dad is sad, and young Ben resents having to look after his mute baby sister, Saoirse, who is weirdly drawn to the water. Then, a forced move to the city changes everything. 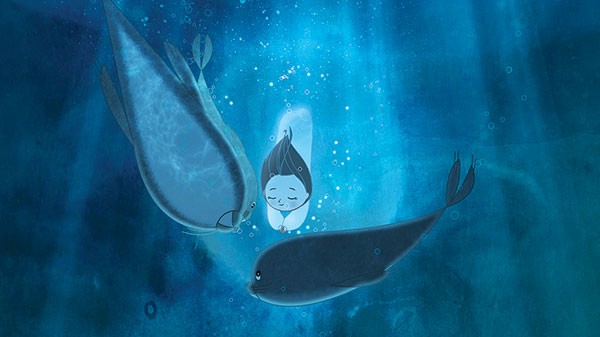 Saoirse, you see, is a selkie, a mythological creature that can shift between human and seal forms. As befitting her dual citizenship, she is deeply in tune with both the natural order and the more shadowy world of fairies, witches and other non-humans, including an odd fellow who lives under the sea and stores his memories in impossibly long strands of silver hair.

All fairy tales need a quest, and Ben and Saoirse set out on theirs — to find the lair of the Owl Witch and her jarred collection of emotions, which she has sucked from various magical creatures, leaving them stone-like and lifeless. If you think the story's humans need to get in better touch with their emotions, you'd be right. Ben must rely not only on his own pluck, but draw from the seemingly silly songs and legends his late mother once shared with him.

Moore's earlier work was The Secret of the Kells, and like that 2009 film, Song is a gorgeous hand-drawn visual exploration of this world and others, combining story, symbols and whimsy. The flatness of the 2-D animation is belied by the swirling colors, the evocative backgrounds and the intricate line drawings, which frequently incorporate folk art. It's a journey worth taking, especially when a singing seal is leading the way.