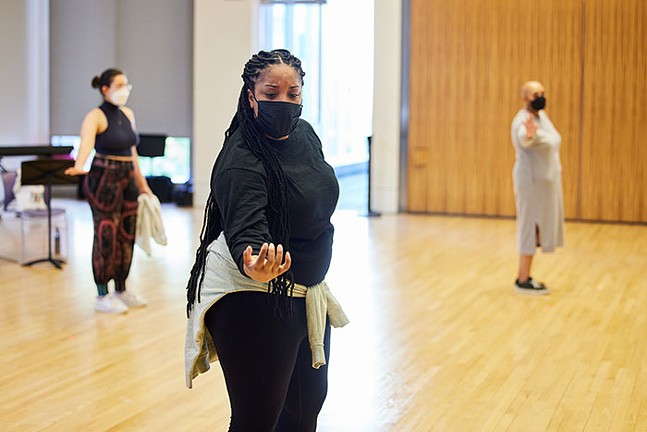 The chamber opera, staging Sat., May 21 at the August Wilson African American Cultural Center, presents a musical take on the extraordinary real life of a Swiss explorer and writer, who, over the course of her tragically short life, defied conventions and carved out her own path. This particular production will also showcase the various incredible women of color working in Pittsburgh, not only in opera but in art, fashion, music, and more.

It will also serve as the premiere work from the August Wilson Center’s Build, Utilize, Inform, Lead, and Develop — or B.U.I.L.D. — residency, a program launched in 2021 to support Pittsburgh-based emerging artists of color.

For DEMASKUS founder and executive producer, Shaunda McDill, the connection to Song from the Uproar goes way back. McDill remembers bumping into fellow Yale School of Drama graduate Gia Forakis, who was directing the show for its 2012 premiere at The Kitchen in New York City.

Years later, McDill and DEMASKUS received a “blessing” from the opera’s composer, Missy Mazzoli, to put their own spin on it, including casting both a Black and Latina woman (Zuly Inirio of the Afro-Latinx Song and Opera Project) in the role of a traditionally white Swedish woman.

“She gave us carte blanche to put our spin on our Isabelle and what the story should look like,” says McDill, adding that Mazzoli has always envisioned the show as something creators and audiences “would embrace in their own way.” 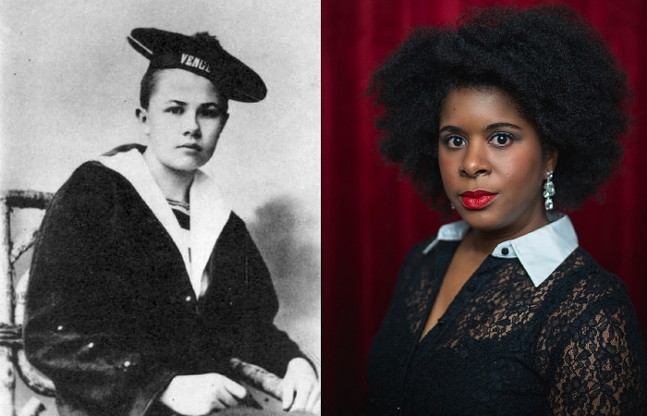 Photo: Louis David/Public domain, Photo: Image courtesy of August Wilson African American Cultural Center
Isabelle Eberhardt and Amanda Van Story
The show draws from the salvaged journals of Eberhardt, who lived during the late 1800s and early 1900s, dressing as a man and publishing short stories under a male pseudonym. Eberhardt moved to French-occupied Algeria in 1897, converted to Islam, joined a Sufi order, and, according to a highly romantic description, “roamed the desert on horseback, and fell in love with an Algerian soldier.” Viewed as a spy by the French administration, she survived an attempted assassination, as well as “a failed suicide pact” with her lover, before drowning in a desert flash flood at age 27.

A statement says the production “uses the migration, resistance, and the fortitude of Black women as its focuses, and looks at how universal Isabelle’s story is to any woman who wants to live as her authentic self while facing the realities of the constraints placed on her by society.”

McDill sees Song for the Uproar as coming at “an amazing moment in time” when women’s rights are under attack, namely by the threat of the U.S. Supreme Court overturning the landmark abortion rights law Roe v. Wade. She also believes the production will help “highlight inequity” in an industry that overlooks contributions by women, particularly women of color.

The representation does not stop at Van Story, as DEMASKUS recruited a long list of local Black women creators. This includes celebrated artist Alisha B. Wormsley as the director of production photography and video design, curator and FashionAFRICANA founder Demeatria Boccella as the costume designer, and recording artist INEZ, among many others.

McDill says that, in order to be truly equitable, DEMASKUS also had to make sure not to “replicate the offenses” usually perpetrated against women in creative industries. She points out that Van Story recently gave birth, and wanted the chance to perform while still recovering. Instead of dropping out, Van Story decided to take on the evening program, while her understudy, Inirio, will perform during the 2 p.m. matinee.

“We're not going to be punitive because you're bringing life into the world,” says McDill. “[W]hat's most important is that she has the opportunity in her life to fulfill something that she's wanted to do as a Black woman in opera. And I'm much more concerned about that than I am about anything else anyone has to say.”

McDill says part of breaking down barriers also includes “lifting as we're climbing,” meaning giving opportunities to performers who may not otherwise have access to audiences. In addition to the one-act opera, the evening will feature the Pittsburgh-based Kassia Ensemble performing a work inspired by its namesake, the 9th-century Byzantine abbess, poet, and hymnographer regarded as the only woman whose hymns are included in the Eastern Orthodox liturgy.

A reception for the show on Thu., May 19 will feature a one-night-only performance of "Free Within Ourselves: Phenomenal Women'' by Duquesne University graduate student, Candace Burgess, described as a “multimedia program focused on celebrating the lives and legacies of African Descended female classical composers and arrangers by showcasing selected vocal works of Maud Cuney Hare and Cynthia Cozette Lee.”

McDill believes that, while pointing out the lack of representation in the industry is important, fighting to stage shows like Song from the Uproar does more to demonstrate why having a variety of voices only makes the region’s arts scene stronger.

“It's an amazing opportunity to showcase what people haven't seen, and sometimes showing you what you haven't seen is better than condemning the people who don't show you,” says McDill.

She also stresses the importance of programs like B.U.I.L.D. as “giving artists a place to experiment and to try new things, and to challenge themselves.”

“I think something exceptional is about to happen, and I just would love for people to have to be able to witness it,” says McDill.
Song from the Uproar: The Lives and Deaths of Isabelle Eberhardt
2 p.m. and 7 p.m. Sat., May 21. August Wilson African American Cultural Center. 980 Liberty Ave., Downtown. $32.25. awaacc.org