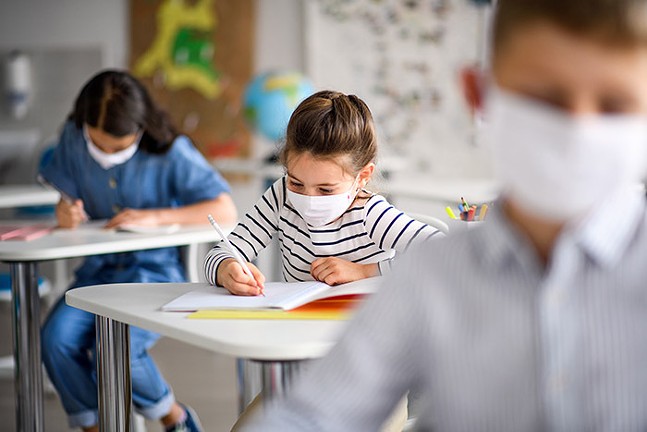 With COVID-19 cases and hospitalizations in Allegheny County on the rise, many school districts around Pittsburgh are implementing mask mandates. And with the renewed mandates, groups of parents and activists are voicing their criticism.

The conflict has erupted to such a fever pitch that Gov. Tom Wolf (D-York) has requested that the Republican-run legislature pass a law to institute a statewide mandate for Pennsylvania schools. According to a recent poll from The Associated Press-NORC Center for Public Affairs Research, about 6 in 10 Americans say students and teachers should be required to wear face masks while in school.

Mask wearing has shown success at lowering the spread at COVID-19, and is the second best way to stem the spread after getting the population vaccinated. Allegheny County recently entered into high community spread of the virus, according to the CDC. On Wed., Aug. 25, the county saw 318 new COVID cases and 9 newly reported deaths.

However, given the political movement that has grown among right-wing conservatives over masks, some Pittsburgh-area parents have made mandates a source of conflict and provided some extreme reasons as to why they don’t believe school districts should be requiring masks.

Pittsburgh City Paper has compiled some of the most outrageous examples, which include two separate Nazi references, blatant Islamophobia, and speakers prescribing drugs normally used to deworm horses.

During an Aug. 12 meeting, a man gave a Nazi salute just after the Fox Chapel School District board unanimously voted to approve the district’s health and safety plan. The plan included a universal mask mandate at all facilities in the school district.

Before the vote, a group of parents and residents gave multiple speeches referencing the American Pledge of Allegiance, liberty, and “personal choice.” One parent told the Fox Chapel School District board that they chose to “spit on the flag.”

Directly after Greg Dolan, who is running for a seat on the school board, spoke and said the mandate is “not American,” a man in a gray shirt standing behind Dolan made a Nazi salute towards the school board members, according to the Pittsburgh Post-Gazette. Seconds after that, someone in the crowd yelled, “You made Dr. Mengele proud!” referring to the Nazi doctor who performed medical experiments on people incarcerated in the Auschwitz concentration camp.

In a later interview with the Post-Gazette, Dolan said the man who gave the Nazi salute “was a complete stranger to me when I walked into that meeting.”

Fox Chapel Superintendent Mary Catherine Reljac denounced the Nazi comments and salute, and said she was troubled with the comparisons some people were making about the mask mandate.

“Anti-Semitic and all hateful speech and actions have no place in our district,” Reljac told the Post-Gazette.

Dozens of parents and residents gathered at a rally in North Park on Aug. 24 to protest the decisions of several area school districts to implement mask mandates. Among the crowd were signs reading statements like “my child, my choice” in opposition to mask mandates, and, according to WPXI, a speaker at the rally claimed that Ivermectin — a drug most commonly used to deworm horses — could be used to treat COVID-19. (The Food and Drug Administration said Ivermectin has not been approved to treat COVID-19 in humans, and warned that consumption can be very dangerous.)

Parents who are pro-mask mandate filed a lawsuit against North Allegheny School District to force the district into a mask mandate and won, and the lawyer behind that lawsuit told WPXI that children with parents who are anti-mask have been harassing kids who want to wear masks.

That lawyer, Alex Saksen, has children in the North Allegheny School District and has been asked by some parents in Mars to file a lawsuit against the Mars Area School District to force a mask mandate.

On Aug. 24, people at a school board meeting for the Mars Area School District voiced opposition to a mask mandate, even though the district wasn’t considering one.

Even so, Garry Lazar spoke at the meeting and questioned masks' efficacy at stopping the spread of the virus, according to the Post-Gazette. He then claimed that being able to see faces was part of American identity, followed an Islamophobic remark.

“These kids have to grow up in this school, and this is their identity, for people to see their faces, not see a mask. We’re not Muslims. We’re Americans. We’re patriots,” said Lazar. (There are millions of Muslim Americans, including famous athletes, influential thinkers, and politicians, and the First Amendment grants all Americans the freedom to practice the religion of their choosing.)

At an Aug. 23 meeting to install an indoor mask mandate at the Bethel Park School District. According to the Post-Gazette, after the vote passed, one attendee yelled, “Dobos and her Nazis are out,” in reference to Bethel Park school board President Pamela Dobos.

In addition to the Nazi reference, the second such reference at an area school board meeting over masks, parents also claimed it was an “an American right” to opt out of masking.

The meeting was so contentious that Dobos had to remind many speakers to allow each speaker their designated time, and had to quiet interruptions, according to the Post-Gazette.