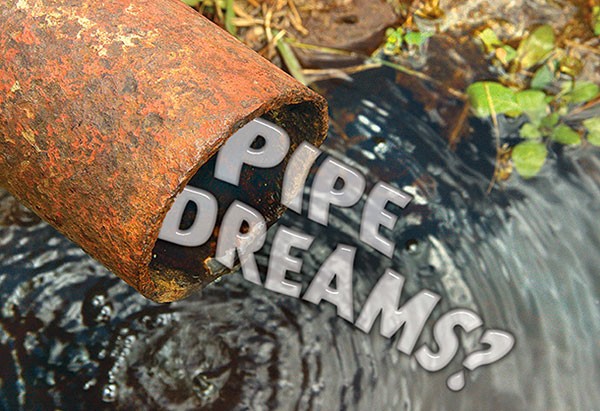 Some officials want ALCOSAN to be more entrepreneurial in other ways. Environmentalists want to see less investment in giant infrastructure projects — which they refer to as "gray solutions" — and more in green approaches. Such projects include rain gardens and green roofs, which capture rain, and pervious pavement that allows it to soak into the ground below.

Such projects must be scattered across the whole region in order to work, but they are "really the only way to reduce raw sewage from going into our river," says county executive Rich Fitzgerald. "ALCOSAN is probably in the most vulnerable position, if you will, because they're at the end of the line. The important thing is what we do upstream, what the local authorities and local municipalities do."

The benefits of such projects can be widely dispersed as well, advocates say. "Operations and maintenance of green infrastructure" — keeping rain gardens healthy, for example — "can create job opportunities for local residents," says Emily Alvarado, interim director of Clean Rivers Campaign. The group has been arguing for greener solutions for the past three years.

Historically, though, ALCOSAN has been wary of such investments. The agency has argued that it can't base its plan on source-reduction efforts made by other governments, because it can't promise anything on their behalf — and that the effectiveness of green approaches remains unproven. In past interviews, Tim Prevost, manager of Wet Weather Programs, expressed concern about the viability and cost-effectiveness of green infrastructure. "Change happens slowly, especially when you're talking about public money. People want to see that it works."

"ALCOSAN has been saying all along, ‘We can't do stuff in communities,'" says Hoffman. But "we've worked with communities like Millvale and Homestead and they would love to do green infrastructure projects. The problem is they really need funding and support from ALCOSAN to make it happen. ... ALCOSAN could go into communities and say, ‘If we were to put a lot of green infrastructure in this certain place, it would reduce the amount of flow. We want to make that project happen.'"

Some observers say there's a structural reason that makes it difficult for ALCOSAN to consider such investment: Those communities have little voice on its board of directors. By law, ALCOSAN's board is comprised of three city appointments, three county appointments and one joint appointment.

"For municipalities, it's really important that the governance changes occur," Risko says. "To get them to transfer trunk sewers [to ALCOSAN], municipal representation on the board of ALOSAN is needed."

Still, Hoffman and others say it's a good sign that both Peduto and Fitzgerald, who make board appointments, support green approaches.

Other local officials must buy in as well, says John Schombert, executive director of 3 Rivers Wet Weather, an organization that seeks to encourage a collaborative approach to stormwater issues.

"This is an organizational and governance issue," he says. "We know what the technical solutions are, but we can't get to them if we don't have a regional approach. Sometimes [the answer] will be green, sometimes it will be gray. But we don't want to make those decisions town by town by town."

Environmentalists point to other areas — Cincinnati, for example — that have faced incorporated green infrastructure to massive sewer problems, despite having fragmented local governments.

"They show that with proper leadership you can overcome that challenge," Hoffman says.

Local officials are beginning to coordinate their own efforts. Pittsburgh's own sewage-treatment agency, the Pittsburgh Water & Sewer Authority (PWSA), is hoping to partner with nearby municipalities including Dormont and Green Tree to resolve overflows in the Saw Mill Run watershed along Route 51. City officials also hope their own efforts with developers serve as a model for other municipalities to borrow from.

"We're working with PWSA and the city to create zero-runoff conditions with a combination of bioswales, rain gardens and porous pavement," says Walnut President Todd Reidbord of the company's Bakery Square 2.0 project. "This watershed drains into Washington Boulevard" — the site of fatal flash-flooding in 2011 — "and we want to do our best to mitigate that."

Other plans are also in the works. Ramage, the Etna borough manager, notes that she and officials from other northern suburbs have been coordinating their own source-reduction efforts. Etna, for one, has a "downspout disconnect" ordinance, in which residents get a $5 refund on their bimonthly sewer bills if they redirect their downspouts from the sewer system and into rain barrels or other diversions. Etna also just contracted to resurface a public parking lot with more porous material.

Still, Ramage says concerted regional effort is needed. "We don't want to be in a place where next generations are looking at the same problem because this was managed individually."

And Schombert, for one, says it's going to take a lot of work for the region to bail itself out of the stormwater problem. "We've just got historic issues of bad planning of how we manage water in our region," he says. "This was created in 150 years, and we can't solve it in 10 or 15. I'm hoping the EPA recognizes that."