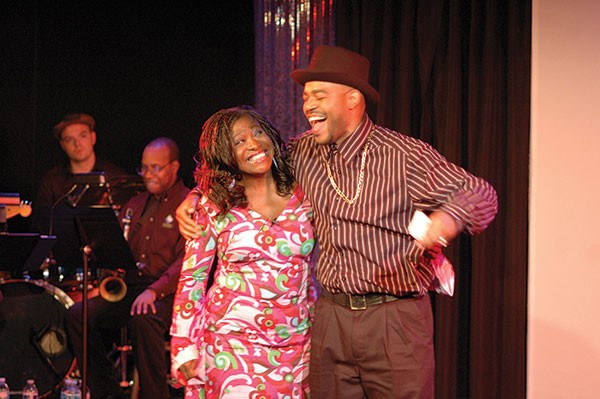 Renn Woods has enjoyed an amazing career. Hit radio singles before she was 15 years old, a role in the legendary television show Roots, stage triumphs and, especially, her definitive performance of "Aquarius" in the film version of Hair. But this is show biz we're talking about, so you know there's a dark side, too — in Woods' case a very dark side indeed.

Pittsburgh Playwrights Theater Co. presents Sold, an autobiographical cabaret/musical written and composed by Woods and adapted from an earlier work. This production is the premiere of this new incarnation.

Woods narrates events in her life, which are also acted by, among others, a very adorable Aliya Sims playing her as a child; Woods playing herself as an adult; a large supporting cast including a creepy Leslie "Ezra" Smith as an abusive manager; backup singers Delana Flowers and Jamilah Chanie ... and the return of sorely missed local performer Sandra Dowe.

To her credit, Woods has no interest in creating a linear "and then, in the fall of 1974, I did ‘x,' and in early spring of '75 I did ‘y'" narrative. Her mode is more akin to creating a collage from life experiences.

So that's all good. But it also must be said that what's on stage is meandering, unfocussed and curiously uninvolving. Big sections of her life seem not to be referenced — at one point she suddenly has a grown-up son, of whom we've heard nothing — while we spend a lot of time on inconsequential past romances.

Like I said above, this production marks the first baby steps of what Woods (who now lives part time in Pittsburgh) hopes will one day be a full-grown show. There's a lot of determined work ahead, but if we learn anything from Sold, it's that determined work is never something Woods has shied away from.