Sojourner House gives mothers in recovery, and their children, a second chance

"Moms adopt a healing routine, and children appreciate it. For some, it's the only healthy routine they've ever experienced." 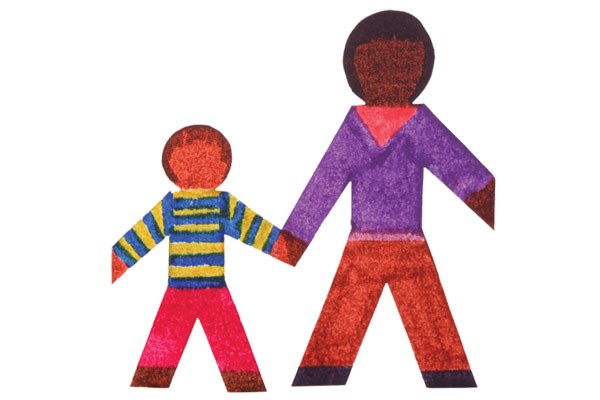 It's a sunny afternoon at Sojourner House, the former Idaho apartments on Penn Avenue, Friendship. A relic from the time when such buildings were named, the building is now a residential treatment home for 14 adult women and their children.

A dozen women are in the basement now, participating in a parenting-through-the-arts program. Today's task: to use colored paper to illustrate one thing each woman values.

"Chains," says a woman in green as she holds up her project. "Ties that bind the family."

A second woman, wearing a Steelers shirt, displays something torn, woven, discarded. "I didn't like the imperfections," she says diffidently, "so I hid them."

"Stop trying to hide the imperfections," adds a fourth. "Be yourself."

"Let the paper be the paper," interjects a fifth. "Don't worry about anything else."

"What is it about weaving that's important to you?" a sixth asks.

"That's the only way I could get it together," the weaver answers.

Hmmmmm, they all say.

"Weaving," she gestures, "is how dedicated I am to keeping my family together."

That's the rub for these women: keeping themselves and their families in one piece. Because not so long ago, each woman gathered here made some very bad — indeed, disastrous — choices. This exercise, like everything else they do in Sojourner House, teaches them to think about the consequences of every act.

Named for the preacher Sojourner Truth, and established in 1991, Sojourner House is one of the rare residential programs that address the needs of addicted mothers and their children. "We help women explore and understand such issues," offers Latina Jenkins, a family-support specialist.

The point of the art project, for example, is to teach women how they can change, how they can create healthy lives and families. "The torn paper is a visual of what's going on in their lives," Jenkins says. "They work so hard for recovery, for themselves and their families, so that they can become who they want to be."

No one works harder than Diana, who came with two of her four kids: 2-year-old Suzanne and 6-year-old Margaret. Diana has worked at a little bit of everything — from pizza-maker to Sunday-school teacher — but used alcohol to control her highs and lows. "There was always a reason to celebrate," she says, "or drown my sorrows."

But then she found alcohol was controlling her, and that liquor had spiraled into heroin. She survived 11 years of addiction, until a final bout began with a single Stoli 'n' cranberry juice and ended up wiping out two weeks of her life.

Diana recalls reacting one day to Margaret's plaintive cries about Mommy's sickness by telling herself, "I can't do this anymore. I have to get better and stay clean." She adjusts Suzanne on her lap. "That was my waking point," she says. "Then I had to dig deep to find out what was happening with me. Because I didn't see myself as an alcoholic."

Diana chose Sojourner House because she could bring her daughters: In traditional rehab approaches, the addict goes away and "the family is left to suffer the consequences of addiction," says Karen Garland, a counselor and assistant clinical supervisor. "Here, the family heals together."

For Diana, part of that healing required going back to basics, the stuff that gets thrown overboard with substance abuse. Personal hygiene. Apartment cleanliness. Doing chores. Bringing up her daughters.

"Being here has shown me who I really want to be," Diana says. "Who I really can be. Without chemicals in my life."

Here, Diana is responsible for cooking, shopping, homework, sending Margaret off to nearby Sunnyside School. "It's important that children see mom as a parent," Garland says, "as the head of the family.

"Moms adopt a healing routine," Garland adds, "and children appreciate it. Hopefully, when they leave here, they carry it with them. Because for some, it's the only healthy routine they've ever experienced."

So far, Diana thinks it's working. "I feel that I've come far working on my deeper-seated issues," she says. "Throwing in the towel would be going back into my addiction." She shakes her head. "I don't want that."

"They tell you to allow five minutes before the miracle — not to be too quick to give up on yourself," Diana adds, pausing to comb Suzanne's tangled hair. "God is giving me another chance to finally complete something."