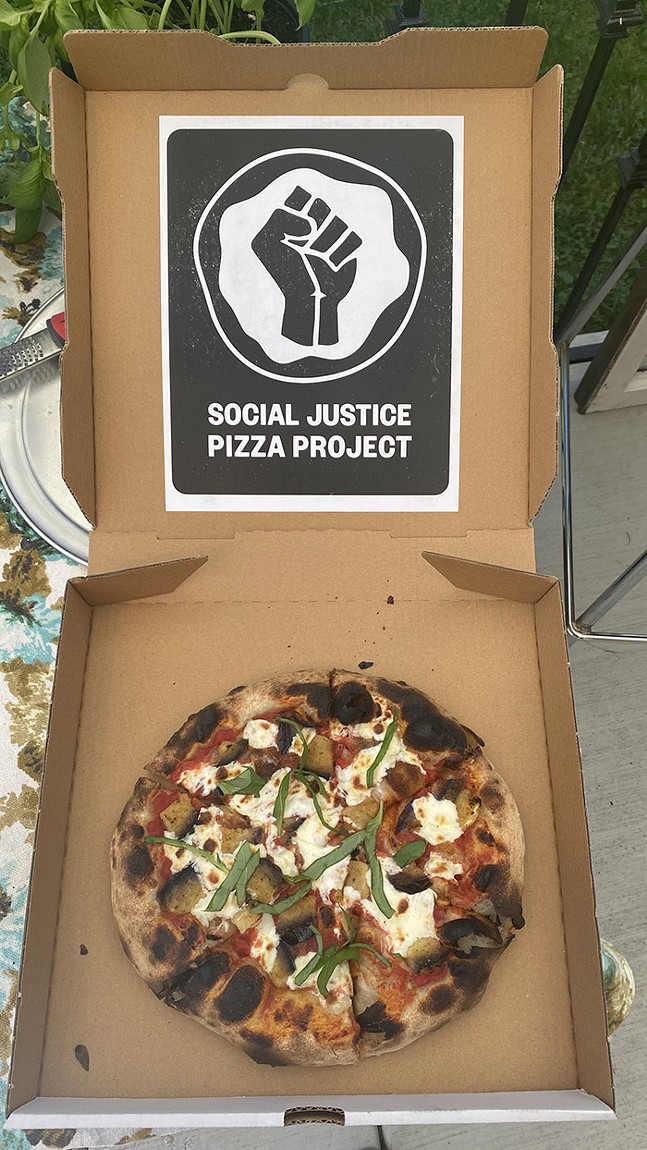 Photo: Stephen Turselli
Social Justice Pizza Project
Cooking one pie at a time in a portable pizza oven out of his own home, Stephen Turselli raised $3,571 in two weeks for five organizations fighting against social injustice.

The plan for his Social Justice Pizza Project (SJPP) was simple: sell pizzas, then donate 100% of the proceeds to various charities.

First, Turselli calculated how much money he wanted to raise, then divided that by the cost of each pizza and a feasible production rate. With limited equipment, he determined that it would take about two weeks to reach his fundraising goal of $1,500.

Turselli, who has a film background and views pizza making as a hobby, announced the project on June 6 via his personal Facebook page. Turselli decided he could make 10 pies a day at a two-per-person limit, with pickup hours Wednesday-Sunday.

“I can't speak to how widely the project spread, but the whole run of pizzas did sell out more quickly than I expected, and there were more donors than pizzas,” said Turselli. The first week sold out within 48 hours.

A number of out-of-town supporters sent donations directly to the project, which Turselli used to give away pizzas to someone in need when he could. In total, 26 pies were paid forward.

He decided to donate proceeds to five different organizations based on their missions, landing on “Bukit Bail Fund because protests are getting wrongfully arrested; SisTersPGH because Black trans women are fighting a fight within a fight, and SisTersPGH provides much needed safe space and resources for that; 1Hood Media because I think it's important to give much needed space in the media to Black voices and amplify them; Abolitionist Law Center because mass incarceration is bullshit; and NAACP Empowerment Programs because education and advocacy is more important now, possibly, than ever.”

In addition to raising money for social justice-focused organizations, Turselli dedicated each day of the project to an artist, business person, or creator, in an effort to help “elevate melanated voices.” Every day, Turselli and his wife promoted the featured person’s products or business on their social media channels, linked websites or shops, and wrote down their information on the boxes that went out that day. Turselli also gifted them a pizza.

Turselli says he’s given plenty of thought to what version two of SJPP will look like. On the project’s Facebook page, there’s mention of shipping out-of-state; Turselli hints at more pizzas in less days and donating to different organizations. But ultimately, he says, he’d just like to raise more money.

The second version of SJPP is predicted to pop-up in August or September, and Turselli is already itching to turn on the oven. On his personal Instagram page on Friday, he posted that he's already going to start making pizzas for "friends and friends-of-friends" to raise money for the next round.