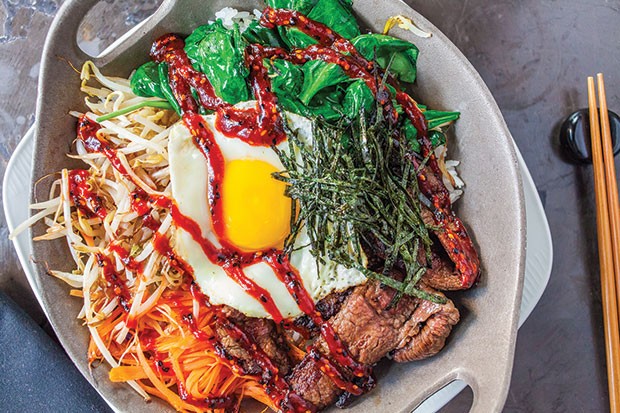 Social House 7 is the latest venture from local restaurateurs AMPD Group. We weren’t sure what to expect: The bland, inscrutable name offered no clues as to the cuisine or the vibe aside from, well, sociability. We supposed it could be anywhere on the spectrum between AMPD’s first two dining ventures, Local and Steel Cactus, which prop up middling food with trendy themes and addresses, and Ten Penny, which is equally trendy but far more memorable — and expensive — food-wise.

Treading wonderingly on the glass panels covering the koi pond set into the vestibule floor, it was apparent that no expense was spared in dressing Social House Seven to impress. The atmosphere is vaguely Japanese, but far from simple and austere, it evoked an elaborate collage of temples, markets, sushi bars and East Asian art forms from textile printing to lacquerware. Social House 7’s own sushi bar is a massive slab of tree trunk, overhung by red paper lanterns and fat ink brushes forming a fascinating fringe over the shelves of liquor. A row of private booths has vaulted ceilings, painted murals and custom ironwork grills evoke textile patterns, contrasting with the rough exposed brick of the old building’s bones. It could have been kitschy, but came together instead as an inspired blend of trend, tradition and invention.

All of which raised expectations of the food quite high. The menu promised sushi, sashimi, and Japanese, Korean, and Thai plates. How far we’ve come from the fusion concepts of the late ’90s, which crudely combined Thai ingredients with French preparations, or simply threw together ingredients from disparate cuisines seemingly without much thought.

Social House 7’s approach to fusion is both expert and intentional, with the result that it can be almost impossible to tease apart the threads of influence and inspiration. Is truffled risotto, made with hondashi (the kelp broth that is the basis of miso soup) and snow peas, a Japanese-flavored Italian dish, or is it a traditional rice bowl with a texture borrowed from the Mediterranean?

The fish variety at the sushi bar was broader than most, including sea urchin and three forms of tuna. In the rainbow roll, filled with “assorted fish,” including fluke, the flavors of cucumber and avocado were subtle enough that the slices of maki varied in taste depending on what fish predominated. In the Godzilla specialty roll, Scottish salmon and cream cheese provided the filling, while seared spicy tuna, seaweed salad, tobiko, spicy aioli and teriyaki sauce made for an elaborately flavored, and textured, topping. Innovation in sushi rolls can be a wonderful thing, but we gave the Pop Rocks roll, whose ingredients included shrimp, asparagus and crab stick, in addition to the fizzy candy, a wide berth.

Pork dumplings were a far cry from greasy takeout fare, with tender wrappers and subtly spiced, meaty pork, all infused with aromas of the star anise and ginger with which they had been steamed in a bamboo basket. And we loved that they were served with nuoc cham, an herbal, Vietnamese-style dipping sauce much lighter and brighter than soy-driven Chinese- or Japanese-style sauce.

“Chee chee” fried Brussels sprouts were also wonderful. A rich, mildly spicy chili sauce distinguished them from the ubiquitous charred Brussels sprouts, slivered almonds provide the crunch, and bonito flakes — shaved, dried fish — danced in the heat of the dish as they dissolved to add their savoriness to the buttery flavor.

We ordered a shrimp skewer from the robata grill, complete with imported Japanese charcoal, glowing at one of the counters. Somehow this intense heat resulted in exquisite, utterly juicy and firm skewered shrimp, subtly flavored with lime and cilantro. “Mongo mongo” lamb chops, two of them, were satisfying with a mild cashew barbecue sauce and practically melted Japanese eggplant.

The outstanding combination of seafood and fire repeated in the scallops atop pad Thai. They were unlike any we’ve ever had — golden brown on all sides, rather than the typical hard sear on top and bottom — while the interior remained sweet and translucent. We saw scallops in the shell by the grill; maybe that’s the secret. The rest of the dish piled a relatively heavy, spicy-sweet sauce on pleasantly chewy rice noodles studded with whole peanuts and plump edamame: tasty, but neither very pad Thai-like nor ideally matched to the unadorned scallops on top.

Simply put, we loved Social House 7. Between the flamboyant atmosphere, the broad, well-executed menu and superb service, AMPD has created one of the best destination restaurants in the city.