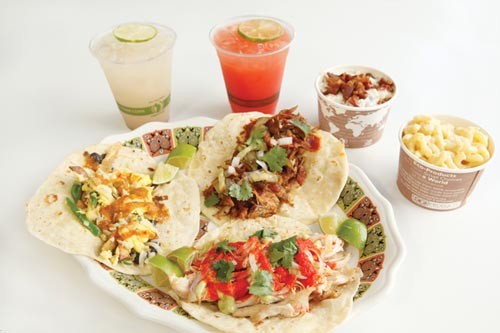 As business-trip destinations go, one could do a whole lot worse than Austin, Texas. Sure, there's the famous live-music scene, but to a foodie, the renowned dining scene provides just as much incentive to cut boring meetings and indulge in baser pleasures. For Jason, whose good fortune it is to make these occasional forays, each visit is a contest between his eyes and his stomach, from the hip places (which, on the whole, are matched by Pittsburgh's) to the food trucks (which leave ours in the dust). But the aspect of Austin's food scene he really enjoys are the barbecue joints and tiny taquerias.

We're really not sure why food that's so ubiquitous down there is so hard to produce up here. Pittsburgh's taco scene, at least, has grown by leaps and bounds, but hardly any local BBQ pit-masters understand that barbecue isn't about sauce, but about smoke.

Well, luckily for us, someone from here (more or less -- Meadville) has brought us someone from there (Colorado, via Austin) who understands this crucial skill. Smoke Barbecue Taqueria is the endeavor of prodigal Western Pennsylvanian Jeff Petruso and bona fide Westerner Nelda Carranco. Their Homestead venue brilliantly combines the best of both worlds, serving fantastically smoked meats on freshly made tortillas, dressed with traditional toppings so cleverly updated, they transcend cleverness itself into the realm of rightness.

The whole menu, not counting breakfast, consisted of five tacos and five sides, so we skipped the difficult decisions and just ordered one of everything. The meat -- pulled pork, chicken, brisket and ribs -- was uniformly tender and flavorful. We would happily eat a plate of any of these meats unaccompanied, but to miss out on toppings like these would be tragic. Perhaps what worked best was the contrast in styles: chicken tossed in a thick avocado cream studded with potato chunks for a rich, hearty impact, brightened by zingy pickled onions and piquant Fresno hot sauce. Pork coated in what it loves best: a light, spicy-sweet apricot-habañero sauce, and topped with soft, sweet sautéed onions. Brisket was made fiery with chili peppers and mustard sauce, and the ribs were treated like barbecue, with a beer-based, slightly sweet sauce and crispy pickles and onions.

There's also a vegetarian taco with roasted corn and poblano peppers, black beans and small, browned chunks of potato. The sweet, earthy ingredients combined with the slightly spicy poblanos to build up a complex, but not fussy, array of flavors.

The excellent quality of the tortillas, which are a bit thicker than typical so they needn't be doubled, provided a satisfying wrap for the fillings. Although substantial and contributing their own flavor, they remained suitably subservient to the wonders within.

Meanwhile, Smoke's sides were hardly afterthoughts. The Southwestern flavor came through strong in both the black beans -- simply prepared and perfectly cooked -- and the pinto beans, which were hearty, studded with meat, and, in a broth that tasted like liquid smoke, centerpiece-worthy in their own right.

This doesn't mean that the other items were left behind. Macaroni salad was smoothly creamy with a dressing neither heavy nor watery, while the potato salad might have been the best we've ever had, and not just because of the topping of crispy, diced bacon. It also featured an extraordinarily creamy dressing that seemed to owe a lot more to sour cream than to mayonnaise. Last but not least, the most innovative side was an apple-jalapeño coleslaw that perfectly balanced sweet and spicy, even as it provided the soothing coolness that makes slaw the classic partner to smoked meat.

One caveat: When we visited, Smoke remained a two-person operation, and while service was friendly, it was slow. We've also heard that the operating hours can be unreliable. However, Carranco told us that Smoke was about to hire its first employee, which should address both concerns.

A trip across the Homestead Grays Bridge is both cheaper and more practical than a flight to Austin, and now it leads to tacos as divine as the best Central Texas has to offer.  What are you waiting for?