A dysfunctional family muddles through in this Pittsburgh-set dramedy

We get all this in the first couple minutes of Smart People, a small-scale dramedy from first-time director Noam Murro. But there's still more to Lawrence's minor-league failings: Lawrence has a ponderous manuscript no publisher will touch; and he can't connect with his two kids, college student James (Ashton Holmes) and his arch, over-achieving teen-age daughter Vanessa (Ellen Page).

Fortunately, fate -- released from the pen of screenwriter Mark Poirier -- is soon to free the unhappy Wetherholds.

While being his usual jerky self, Lawrence falls from a fence and suffers a stress-induced seizure. This double-barreled plot device puts Lawrence in the care of ER doc (and former student) Janet (Sarah Jessica Parker), and suspends his driving license. Conveniently, Lawrence's ne'er-do-well brother Chuck (a shaggy, craggy Thomas Haden Church) has just turned up, indigent and happy to be the designated driver in exchange for room and board.

After this rigged set-up, the rest of the plot unfolds more naturally, as our featured players connect, disconnect and -- yup -- eventually reconnect. If Chuck is the free spirit sent to loosen up Lawrence, perhaps Janet can unlock the unhappy widower's buried humanity.

Set and filmed in Pittsburgh, Smart People will keep locals happy location-spotting around Oakland and the East End. Saving money, the filmmaker even uses a couple of recognizable Pittsburgh locales as New York City locations.

But recognizable streets aren't all that makes Smart People feel like a collection of familiar pieces. The Pittsburgh professor in mid-life crisis is reminiscent of Wonder Boys, and Church, Page and Parker all recall previous, showier roles. A PR flack wouldn't be so wrong barking: "It's Wonder Boys plus Sideways plus Juno, with just a pinch of Sex and the City."

Such allusions may not have popped into my mind so easily if the characters had been developed more fully. With the exception of Lawrence, it's as if we joined this gang mid-stream. What's the source of Lawrence's anger with Chuck, or Janet's quiet misery? And how did Vanessa become such a funky, quirky Young Republican? Her sassy retorts and epigrams will remind viewers more of Page's break-out role as Juno, and not of the sort of proto-neo-con who keeps a framed photo of Ronald Reagan above her bed.

But, Smart People isn't without its small charms, and it stays relatively grounded. This is a family laboring under mild dysfunction that perhaps can't be cured but can be muddled through. Janet suggests as much when she tells Lawrence, "We're smart people." She doesn't mean book-learnin' (which hasn't much helped this gang, anyway), but rather the useful ability to acknowledge run-of-the-mill failings, get over them and get on with it. 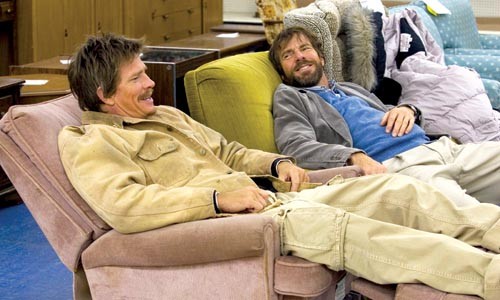