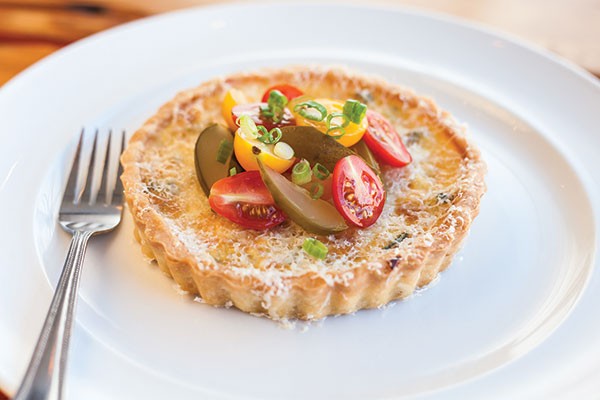 Smallman Galley’s business model is a story of its own. Rather than competing with other restaurants by featuring a single, star chef, Smallman is an incubator created to give four would-be restaurateurs a leg up in the industry. Each has 18 months to attract a clientele — and investors — before the chalkboards are erased and a fresh four are brought in. We’re currently about eight months into the inaugural lineup.

The physical layout makes a virtue of the Galley’s odd L-shape, with doors on both Smallman and 21st streets in the Strip. One leg of the L is dedicated to the row of ultra-compact kitchens, separated by a corridor from a bar and moodily lit dining area opposite. In the other leg, communal tables fill a bright, high-ceilinged space. The vendors display their menus on chalkboards, and patrons order from one or more as the spirit moves them, receiving a text alert when their food is ready for pick-up. Galley workers clear plates and bring water. Industrial-chic decor seems more at home in the Strip than elsewhere, but all those hard surfaces translate to an atmosphere between convivial and downright loud.

The Galley’s current four concepts share enough of an approach to complement one another, while varying enough to challenge a diner’s decisiveness. Carota Cafe is veg-forward and Provision is meat-forward. Josephine’s Toast is where “refined flavors meet the whimsy of toast!,” while Aubergine Bistro takes a somewhat more formal approach to small plates, entrees and sides. All of them tend toward fresh and local, offering among them plenty of house-made pickles, condiments and the like. And all of them produced some truly excellent food.

A sous vide pork chop from Provision was relatively lightly browned, perhaps reflecting the limits of the small kitchen. But the quality of the meat came through, thanks in part to the reliable water-bath technique (although part of this chop was considerably rosier than the rest). The star of the dish was actually the confit beans: firm, rich and creamy, without any heaviness or distracting extraneous flavors.

The flavors of Provision’s tostada were also superb. Green chile suffused a haystack of shredded chicken; lemon aioli was a distinctive replacement for crema; and the whole was topped with an unmistakable yet subtle house kimchi. The small, fried tortillas were light and crisp yet substantial enough; the texture of the chicken was soft and reminiscent of chicken salad.

We also loved the octopus from Carota Cafe. A single tentacle was charred along with quartered peewee potatoes and dressed with a chimichurri of grilled scallion and briny olives. Only at the skinny tip of the tentacle did the texture become a little rubbery, as if overcooked.

A summer string-bean salad from Carota Cafe was our only really flawed dish, but not bad. The issue was that each of the four beans had a different texture, and not all of them were equally well suited: While many were fresh and crisp, the largest were flat-out tough, making it hard to appreciate the smooth but zesty shallot vinaigrette and juicy, peak-season tomatoes.

Aubergine’s ricotta tart was like American summer on a plate: corn and diced green beans within the subtly sweet cheese, with heirloom tomatoes and dill pickles on top. The corn was sweet, the beans vegetal, the tomatoes almost fruity and the pickles subtly tangy.

Aubergine used Anson Mills grits in a number of guises, including beneath meatballs and tomato sauce. The coarsely ground grits, with the pleasingly chewy germ intact, stood in rustically for polenta, creamy and with solid corn flavor. The meatballs were well above average, tender with a mild, meaty taste; the bright tomato sauce added a welcome acidic note.

Not everything at Josephine’s was served on toast, but the concept did unify the menu. In the case of BBQ chicken, the smoky-sweet sauce on the combined chicken and baked beans was just shy of cloying, but smothered any noticeable contribution from the thick bed of grilled bread. Baby mustard greens, brightly dressed, offered an effective peppery contrast on top of it all. A dish of locally homemade yogurt, honey, fruit and granola renewed our faith in breakfast for dinner.

Such limited sampling prevents us from saying anything definitive about any one concept or chef, but we can happily recommend Smallman Galley. It is a sort of co-working space for restaurateurs, allowing diners to try a variety of ideas and approaches. We look forward to fully experiencing the singular restaurants each of these concepts will — with luck — become.