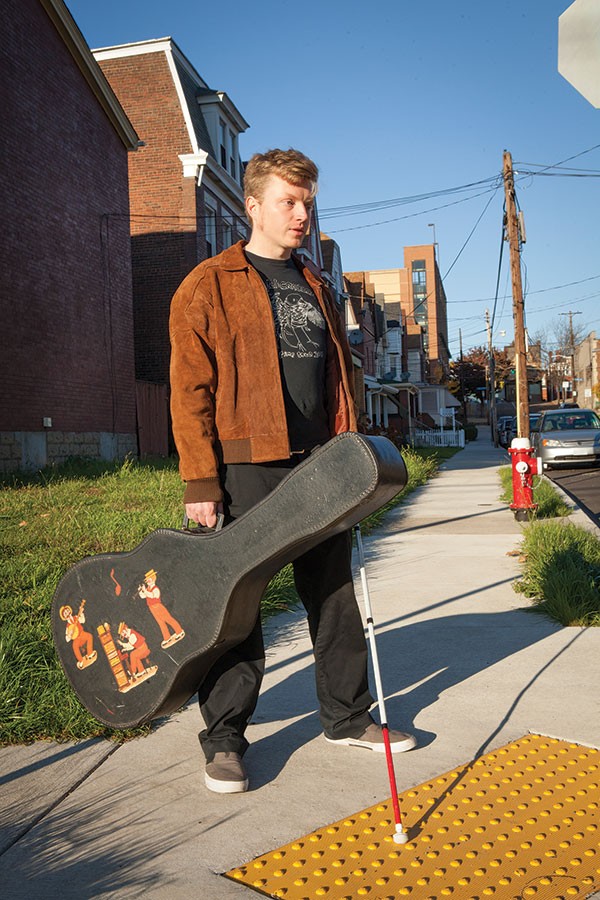 Photo by Heather Mull
Gabriel McMorland is a musician and accessibility advocate.

Gabriel McMorland has been going to see — and play — live music since he was a teenager — often in smaller, less traditional venues, as his tastes skew toward punk rock. But his relationship with live shows is different than many: McMorland lost most of his sight at age 19 (due to what he calls "a genetic time-bomb"). As a bass player, a fan of left-of-center bands and an advocate for accessibility (he co-founded the Pittsburgh Accessibility Meetup group), he finds a lot of his interests converging at music venues, and not always in a good way.

"In reality, a lot of music venues are probably not fully accessible" for patrons with disabilities, including limited mobility, he says. "But a lot of those problems are sort of structural or architectural, and would be very expensive to fix."

That's the sort of issue faced by Eric Stern, owner of Brillobox: The small Bloomfield venue is up to code, Stern says, but it's less than ideal in terms of accessibility. Bands play on the second floor, and a long, narrow staircase is the only way to get there

"I don't even know what would be possible" in terms of structural improvements to the building, Stern says, due to "the sheer cost." Right now, he says, patrons who use wheelchairs certainly aren't prohibited from the second floor, but need to make arrangements to have friends carry them up the stairs.

"In general," Stern says, "we try to make this as friendly and accessible across the board as possible. We try to help as much as we can" when a patron calls ahead with accessibility questions, or arrives and needs assistance.

McMorland doesn't look at the problem as lying simply with the owners of small venues. "The question is, what can be done to help them?" he says. "What can be done as a city? I'm interested in seeing what people who help fund more inclusive arts and culture [think] — how can that be done in a way that helps the actual venues where this stuff happens?"

"This stuff," in this case, is the less-mainstream music scene. While big venues like arenas and concert halls, which host a variety of events, often have many options for patrons with disabilities, smaller venues are caught in a bind. Many are in older buildings, with odd setups. (The Smiling Moose is another local venue where bands play on the second floor.) And while some arts nonprofits are able to secure foundation grants to help improve accessibility, that money is generally not available to music venues, which are often for-profit bars.

While there are tax breaks available for businesses upgrading to be more disability-friendly, says Anne Mulgrave, manager of grants and accessibility of the Greater Pittsburgh Arts Council, that only goes so far. "That presumes that they have the money to invest in the first place," she says.

Another issue, says Mulgrave, is that owners of clubs and other small businesses often aren't clear on what they can do to improve accessibility and what resources are available to them

"The biggest issue is that nobody understands the [Americans with Disabilities Act, or ADA]," she says, "and there's nowhere they can turn for information. They don't want to call the city, because they're afraid they'll turn their enforcement on them. The Mid-Atlantic ADA Center ... was created by the Department of Education and is entirely educational — they can call and be completely honest about their situation and the Department of Justice isn't going to come after them. But nobody does that, because they don't know it exists, or they're still afraid — they don't trust."

Ben Penigar, of Grey Area Productions, says when his company took over the mid-sized Rex Theater on the South Side five years ago, there were costs involved in making the venue more accessible. Part of that stemmed from a change in zoning, he explains; the Rex had been zoned as a sit-down movie theater, and Grey Area changed it to an open-floor venue. During renovations, they added ramps and built out a restroom to be accessible.

"That was one of the surprises" that came up when the company took over the theater, he admits. "We were already at the venue when we found out about everything we had to do." But, he says, the cost was worth it for a number of reasons. The accessible restroom also serves as a family restroom, and Penigar says patrons with mobility issues or other disabilities get in touch on a weekly basis to make accessibility arrangements.

Beyond the big structural changes, McMorland says, there are small, easy adjustments that venues and organizations of all kinds can make in order to be more accessible. One simple step that goes a long way is simply communicating clearly.

"Something that never would have occurred to me until I started having a disability is that it's really helpful to post, everywhere possible — on your website, on your flier if there's room, on your ticketing page — post, ‘We want to make this accessible. Please let us know how we can do that.' And give a phone number. If you think about all of the different things someone has to spend their time contacting in a day to make sure they can participate — the grocery store, to the bus stop, to the library ... it's not just your venue; it's their entire day."

Some larger arts groups and venues, like the Pittsburgh Symphony, have an accessibility information page, easily found via their website's home page. Most local music venues don't, or if they do have information available, it's not immediately apparent from the venue's main page

Mulgrave's advice on accessibility information for music venues is the same she gives to other groups. "The best thing to do is to come out and say, ‘This is exactly what to expect when you're here.' Because people get angry when they show up to a place with certain expectations and they're not met. They just need the information to make a decision. The advice a lot of people have gotten in the past, if they're not 100 percent accessible, is ‘Don't admit it.' What I say is ... the best way to build goodwill is to describe exactly what your accessibility is."

And another aspect of live-music events that can affect the quality of the experience for patrons with disabilities is one that's common to any public place: The concert-goers themselves. Most venues with accessible seating only have it in one spot, notes Josie Badger, an ethicist and accessibility advocate who uses a motorized wheelchair. "In venues that have lawn seating, say, it's usually in the back — where the drunk people all end up. And you always end up being a support for someone."

"And you always end up behind the people who want to stand," she adds. "Some people try to sit so they don't block your view, but then everyone else is standing, so they can't see, and they end up standing back up."

Ultimately, says McMorland, arts groups have been making great strides in accessible programming. But there's still plenty of room for improvement, and smaller venues are one place where that's clear.

"The goal isn't [just] to have opportunities that are accessible," he says. "The goal is to make everything accessible. That means Gooski's and Brillobox and Cattivo — bars where people actually go to see bands, or maybe start a band, to play for their friends and strangers — not just being a passive consumer in this one stream of programming that's available to you. Which is good and well-meaning, but it's beyond that: You have to give people all the options everyone else has, and make it so they can create their own music if they want to."