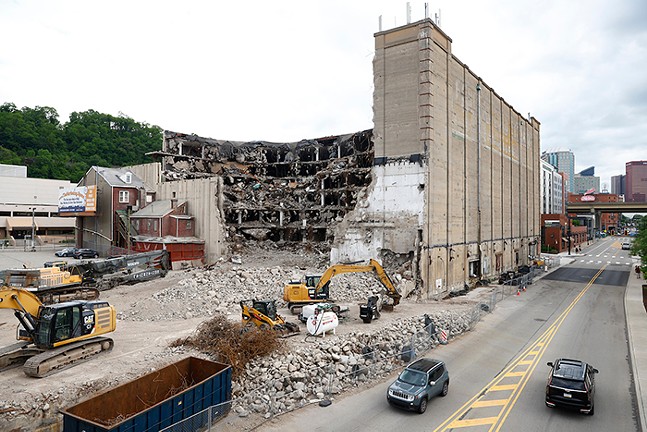 CP Photo: Jared Wickerham
Demolition of Wholey’s Fish Market warehouse behind Lucky’s bar in the Strip District
The north side of Penn Avenue, between 15th Street and the base of the 16th Street Bridge in the Strip District, is a construction zone, with a chain link fence blocking the sidewalk and yellow caution tape encircling an abandoned shopping cart at the east end of the block. Just past multiple orange traffic cones sits the identity-obscuring, small glass block facade of the Real Luck Cafe, commonly known as Lucky’s.

In the daytime, patrons smoking outside the bar stand next to cranes and bulldozers parked in the concrete rubble of the New Federal Cold Storage Building, better known to locals as the Wholey’s building. The warehouse’s demolition is actively underway to the tune of a million dollars, granted by the state of Pennsylvania to New York City-based redevelopment company the Acram Group.

But despite the demolition, Lucky’s still stands. And along with The Brewer’s Bar up on Liberty Avenue and Donny’s just across the Herron Bridge in Polish Hill, it’s one of the few remaining venues that once constituted a large network of gay bars and after-hours clubs across the city. It bears the name of Robert “Lucky” Johns, a pivotal figure in Pittsburgh’s gay nightlife scene who bought the building in the early '90s. (The Allegheny County Real Estate Portal lists the sale at $1 in 1990, but Pittsburgh City Paper was sent a copy of the deed, listing the price as $35,000 in 1991.) Lucky, who died in 2014, was the subject of the exhibit “Lucky After Dark: Pittsburgh's Gay and Lesbian Social Clubs 1960-1990,” organized by Dr. Harrison Apple of the Pittsburgh Queer History Project.

Lucky’s is currently still locally owned by Nancy Pribich, who ran the bar with Lucky prior to purchasing it from him outright in 2004; on the bar’s Google profile, she claims that Lucky’s is “the oldest woman owned gay bar that still has a dance floor!!,” though Apple says he believes it “may be the oldest queer bar that is woman-owned featuring nude dancers in Pittsburgh, not the greater metro area.”

The narrow brick three-story building shares a wall with the Wholey’s warehouse and this proximity is slowing the process of demolition. Instead of razing every structure, the demo crew carefully works around the bar, whose offerings are advertised on a sandwich board out front: “6-PACKS TO GO / WINE TO GO! <3 / HAPPY HOUR MONDAY-FRIDAY 5:30-7:30 / DANCERS UPSTAIRS THURSDAY TO SUNDAY 10PM-2AM / MUSIC AND DANCING / FREE MUNCHIES.”

From the 16th Street Bridge, the seven stories-high Federal Cold Storage Company building, according to David S. Rotenstein in The Metropole, is visible mid-collapse with its interior chambers exposed, looking more like a grand Roman ruin than familiar Rust Belt decay, juxtaposed next to the shocking red exterior of the Real Luck Cafe.

On a Saturday night, an unmarked wood veneer door swings open at the back of the bar, revealing what appears to be a broom closet as a steep set of stairs lead up to the dance floor. There’s enough space in the dark room with mirrored walls for patrons to dance, but, on this night, the only dancers are being paid, and the clothed public stays relatively still, watching. Three nude men dance atop the upstairs bar; one wears an elaborate jock strap and pup mask; another sports a leather harness and armbands that someone on the floor tenderly slides over his head and buckles into place while he continues to grind; the third dances completely bare.

Most patrons are enthusiastic and respectful, clapping loudly and tucking dollar bills into garters, or simply standing back to watch. The only exception is a visibly straight party of four who move rigidly about the room, uncomfortable and gawking, careful not to touch anything at all.

But touch and comfort is part of Lucky’s appeal, not only upstairs with the dancers, but also on the first floor, where the dive bar serves generous pours of whiskey for $5.50 and an older married couple banging along to classic rock hits pouring out of the jukebox buys a stranger a drink, expecting nothing but a hello in return. There’s a buffet table out with a crock pot stewing, plus cookies and slices of pizza for the taking; red plastic bowls of popcorn sit on the bar.

Next door, the Acram Group plans to build four "mini-towers," the tallest at 23 stories, according to the Pittsburgh Post-Gazette. (In December 2021, KDKA reported that the towers would have “green, plant-covered roofs” on the site of the old Wholey’s building.) From that high up, it’ll likely be difficult to hear the blasting mid-2000s pop music mixes pumping on the dance floor at Lucky’s, to smell the cigarette smoke, to talk to Pam, the bartender who softly calls patrons “babe” as she serves their drinks. Real Luck Cafe. 1519 Penn Ave., Strip District. Search “Real Luck Cafe” on FacebookUPDATE: This story has been updated at 10:10 a.m. on June 3 with several changes: The height of the development as reported by KDKA as 14 stories in December 2021 has been updated to reflect more recent reporting; Pittsburgh City Paper was sent a copy of the building's deed, contradicting the price listed on the Allegheny County Real Estate Portal; and, a link has been added with more information on the seven stories-high Federal Cold Storage Company building.