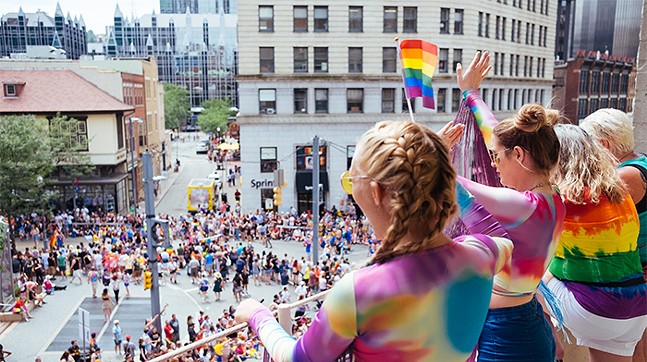 Delta was responsible for organizing Pittsburgh Pride, the region's largest LGBTQ Pride celebration, and as Pittsburgh City Paper has discovered, some of those vendors set to participate in the canceled 2020 Pittsburgh Pride Fest are demanding refunds on vendor fees, and they are still waiting in limbo.

CP reached out to several vendors from Pittsburgh and nearby states. Most of them claim they have contacted Delta, sometimes multiple times, asking for refunds on fees that range from $200 to $800.

Bethanie Good, owner of Gutterfly Limited clothing company, aired her grievances on Facebook, detailing how she begged Delta for her $500 vendor fee back.

“They were just like, 'Sorry, no refunds,'” says Good, “and I was just blown away because here I am, a queer, local small business owner, what I thought they were supposed to be representing.”

As a vendor business, she says losing the fee, on top of any money she would have made at Pride, was a blow to her financial well-being. “That's a month of rent for me,” she says, adding that the pandemic has made it especially difficult for small-business owners like her to make ends meet.

Three other local business owners, Megan Zammer of Leather Trash, Eli Shumaker of Body Euphoria Inclusive Massage, and Terry Diehl of Big Diehl Peppers, all say they have also either requested their fees be returned or heard nothing from Delta after the event was canceled.

Both Zammer and Good say that while the vendor contract they signed stipulated that fees would not be returned, it did not account for such an unprecedented event, like canceling the festival and the organization that runs it dissolving.

“The contract, when applying, is very clear about no refunds, but that is going off of the idea that there is going to be an event,” says Zammer, who paid $200 to vend in a special, lower-cost local artists market section. “A global pandemic is a pretty good reason to make the exception and refund your vendors.”

The Pittsburgh Pride vendor page also explicitly states, “Unfortunately we do not offer refunds under any circumstance.”

However, Good says that any “no refund” policy should be void given that Delta was unable to uphold its end of the contract by actually hosting the event.

Shumaker, who had to close his LGBTQ-friendly massage therapy business in Lawrenceville because of COVID-19, says Delta owes him $520 in vendor fees and donations. He adds that, in his experience, Delta is the exception in terms of how it treat its vendors.

“There are a number of events we had already registered for the 2020 vendor season, all of those events were prompt to return our vendor fees as soon as they canceled,” says Shumaker.

The vendors did receive one update from the organization since Pride was canceled, via an email obtained by CP that was sent on Wed., Sept. 2 and signed by the Executive Committee of Delta Foundation of Pittsburgh.

“We, along with the law firm of Leech Tishman, are working to assess the assets of the Foundation as we move forward with the dissolution process," reads the email. "We will be communicating with you the necessary notices in conjunction with the Attorney General and in accordance with PA Non-Profit Corporation Law. We hope to move this process along as quickly as possible as we know that everyone is experiencing financial hardship at this time. We appreciate your patience and understanding during this difficult time.”

While appearing to address the unpaid fees, the email gives no indication if and when refunds will occur. CP reached out to former Delta marketing and community development director, Christine Bryan, for comment on Tue., Sept. 1. Not long after, vendors reported receiving the email update from Delta. Delta also has yet to return CP's request for comment.

All the vendors CP spoke to expressed frustration over Delta's apparent lack of consideration for the community it was supposed to uplift. Diehl, who runs his small gourmet pepper blend business out of his house in the Verona-Penn Hills area, says he has attended every Pride since moving to Pittsburgh in 2010, and that being able to have a table at the 2020 event was “a dream come true.”

He adds that this was despite knowing Delta's history of mishandling the event, which includes everything from booking what many viewed as homophobic musical acts to promoting Trump Pride merchandise on its Facebook page.

Shumaker says that, given Delta's history of questionable financial practices, as well as its “failure to address racial, disability, gender identity, and class equity within the LGBTQIA+ community,” he's not surprised that a new contention has emerged.

“In hindsight, it is clear that we should have continued to steer clear of this organization,” says Shumaker.

Shumaker and others are also concerned about where the money paid by vendors went now that Delta dissolved. The Pittsburgh Pride website boasts a huge list of vendors and parade participants who paid to be part of the 2020 event, ranging from large corporations, such as Starbucks, Walmart, and EQT, to small-scale, independently-owned businesses.

Gil Kudrin, director of development at the Cleveland-based screenprinting company Nightsweats & T-cells, says that while he's disappointed by Delta's actions, he believes it reflects a larger problem of event organizers and nonprofits exploiting the LGBTQ community. He recalls multiple instances of how his own company, a 30-year business that is run by and supports HIV/AIDS patients, was hired for events where bills were unpaid and promises were not kept.

In addition to the $650 Kudrin says his company paid to vend at Pittsburgh Pride, they also spent thousands to produce T-shirts for the event months ahead of time. He says he and his partner have reached out multiple times to request a refund and heard nothing back from Delta until the Sept. 2 email.

Regardless of the circumstances, Kurdrin says Delta's handling of the situation hurts both financially and ethically for him, his coworkers, and the community his company serves.

“You're still ripping off somebody with AIDS,” says Kudrin.

Good and others are open to taking legal recourse in order to get their money back, should it come to that, but wonder if paying lawyer fees is worth it compared to the refund amounts. For the time being, Shumaker says he's just glad Delta is gone and its hold on Pride is finally broken.

“This has been called for by the community for a long time,” says Shumaker. “I’m just sorry it has landed with the losses on the backs of Pittsburgh’s local small businesses, nonprofits, artists, and makers.”