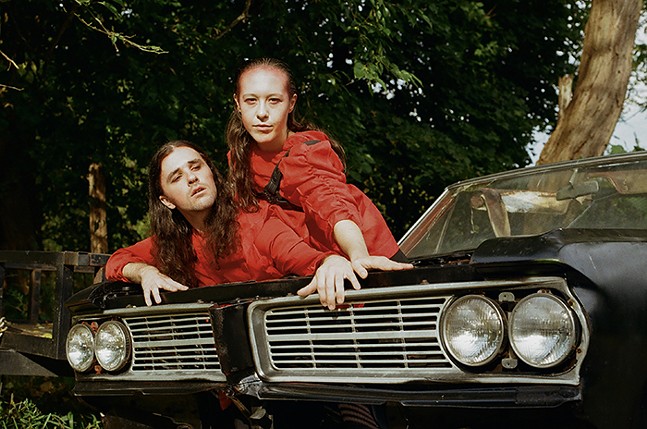 Photo: Anna Labick
slowdanger’s Taylor Knight and Anna Thompson
The pandemic has forced nearly everything online, including performing arts that would otherwise take place in front of a live audience. While this has become a necessity, Taylor Knight and Anna Thompson, co-artistic directors of the multidisciplinary performance duo slowdanger, were frustrated with the limitations of going digital.

“As a performer, it just makes me sad sometimes to watch a performance online,” says Thompson. “While we have participated in a lot of virtual performing, there's almost a flattening of interaction, where you're kind of passively watching the screen.”

The two decided to work with a number of fellow artists from Pittsburgh and around the country to create remix disruption, a months-long series focused on finding ways to better engage virtual audiences, providing opportunities to creative communities, and commenting on issues highlighted by the pandemic. Kicked off in January, remix disruption includes workshops, livestream performances, and a new web platform that implements technology to allow for more active, immersive viewership.

Knight says they wanted to bring in other local artists and performers, as well as those they have met while touring over the years.

“We usually provide all the sound in-house, but, for this series, we wanted to celebrate some collaborators,” says Knight.

While SPI JAMS and other programming takes place on already established platforms like Zoom and slowdanger's updated website, remote possibility represents a more ambitious move for the pair. The “telepresent platform” was designed to enable viewers to interact with livesteam performances using face-tracking data and other methods.

Thompson says that instead of just sitting and watching a static broadcast, remote possibility gives viewers more control over how they experience a performance. Much like the other programming, they focused on collaboration, this time working with software engineer Kevin DeLand and Robert Zacharias, a computing specialist who helped create Resonant Body, a multi-sensory dance performance slowdanger premiered at the Carnegie Museum of Art in 2019.

Thompson and Knight believe that, while something like Resonant Body would be difficult to create online, as it produced vibrations and sounds through a kinesthetic speaker system controlled by sensors on their bodies, remote possibility could add a communal feel that is often absent from traditional livestreams.

Innovating the online performance sphere, and organizing remote possibility in general, took time, something slowdanger had plenty of after their live shows like far field, which was originally scheduled to premier at the Kennedy Center in July 2020, ended up being canceled or rescheduled. (A digital version of far field, which was created with experiential designer and creative technologist Anna Henson will open as part of remote possibility on Sat., Jan. 16.)

Thompson says they wanted to support underground music artists and other performers who, like them, were devastated by the pandemic.

“For us, it took a considerable amount of time to even process what was happening,” says Thompson. “We had so much planned [for] the year, and to have it completely ripped out from under you was very traumatic on so many performers.”

But while the pandemic has essentially disrupted life as we know it, Thompson and Knight admit that it also put into perspective how damaging the demands of pre-COVID life were to their health and well-being.

“I also have just been talking with other artists who were touring as much as we were prior to the pandemic and just having conversations about how unsustainable that life was, and how exhausted we didn't even realize we were,” says Thompson. “We're both questioning, how do we build a more sustainable future for ourselves and our industry so that we don't burn out?”

They examine this more thoroughly with weighted sky, an in-process, high-concept piece that explores the “collapse of capitalism and white supremacist structures” and deconstructs the so-called hustle culture that leaves independent artists and others scrambling to make a living. It then seeks to actively imagine a “queer future where we can thrive.” 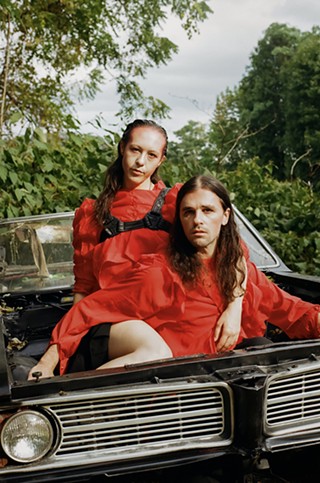 Photo: Anna Labick
slowdanger’s Taylor Knight and Anna Thompson
Thompson says the show addresses these heavy themes not only in its imagery, but its creation process by “decentralizing the role of the sole director” and instead “sharing the roles of directorship and production” with their collaborators Anya and Mitsuko Clarke Verdery of the New York City company, MICHIYAYA Dance, Pittsburgh-based sculptor Rob Hackett, and Abdu Ali, a noted avant-garde musical act from the Baltimore club and queer underground rap communities.

The online version of weighted sky will serve as a sneak peek of the in-progress show, tentatively scheduled to stage in November 2021 at the Andy Warhol Museum.

While they still look forward to in-person performing, Thompson and Knight say they have developed an unexpected appreciation of the downtime forced on them by the pandemic. Instead of constantly and simultaneously performing and developing new works, they have room to more thoroughly plan several future projects. They're also working with a mentor from a dance company management program to create a better work-life balance for themselves.

“That requires setting more boundaries and being more honest about what we're capable of, and really prioritizing the relationships that are really enriching for us creatively and professionally,” says Thompson.

Overall, Knight is grateful for the community, experience, and knowledge they've gained to tackle challenges that will likely continue even after the pandemic ends.

“So much of his COVID period has been this liminal space where we're all kind of floating in between,” says Knight. “We don't know how it's going to settle.”

remix disruption. Continues through 2021. Registration required for some events. slowdangerslowdanger.com/remix-disruption