In "Sick of Food," the song's narrator has wearied of basic human appetites -- food, drink, love -- and in the process, uncovers a more intense need: a desire to stop stumbling through life "walking in my sleep." Some say it's from the perspective of a dying AIDS patient, which seems to make sense, coming from the San Francisco band American Music Club in the aftermath of the 1980s.

The first time I heard "Sick of Food," I was on a road trip with my younger brothers, and switched it off midway -- even heard out of context, it's obviously not kid stuff. And indeed, both with American Music Club and as a solo artist, Mark Eitzel has been making music for adults for over 20 years, a catalogue remarkable for its bleak portraiture and transcendent confessions.

"I kinda feel like I just tell stories," says Eitzel, from his home in San Francisco. "I fucked up when I was a kid -- I should have started singing all my songs with a smile on my face. That way nobody would have ever said anything I did was miserable or sad. They would have just said, 'Oh, this is great!'" He lets out a laugh.

Originally on small indie labels, AMC released seven albums, including two for majors Reprise and Virgin, before crashing and burning in 1994. Alias Records released what many consider the band's finest album, 1991's Everclear, which features "Sick of Food" and earned Eitzel Rolling Stone's "Songwriter of the Year" award. (These early years are currently represented in the compilation American Music Club: 1984-1995.)

After a 10-year hiatus, AMC re-formed, releasing Love Songs for Patriots on Merge Records in 2004, and later that year recording a live album, A Toast to You -- at Pittsburgh's Rex Theatre.

"To be quite honest with you, I've never listened to it -- I can't really bear to hear myself sing, especially in a live situation," says Eitzel. "From what I understand, however, it's a very good CD." (A fan in England organizes tapings of AMC's shows, and advocated for its release.) While Eitzel remembers the show fondly, not everybody had the greatest time: As one five-star review on amazon.com puts it, "What you have here is a board mix of American Music Club giving 150% to an indifferent beer drinking pittsburgh yinzer crowd."

Now, AMC is back with a second album for Merge, The Golden Age, for which Eitzel and longtime guitarist Vudi recruited Sean Hoffman on bass and Steve Didelot on drums. "The idea of recording this album was to do it very simply and not do lots of overdubs and not make it a big, polished stinker," says Eitzel. "There was no Auto-Tune used on this record, amazingly."

Opening with the acoustic arpeggios and snare brush shuffle of "All My Love," The Golden Age spans both dark dissonance ("The Stars") and songs that seem plucked from an earlier -- well, golden age. "The John Berchman Victory Choir" is a loungey ballad, while "All the Lost Souls Welcome You to San Francisco" is a sunny postcard of a song about Eitzel's city, "a city built by fire trucks / and skeletons who grin and grin."

Yet the desperation and darkness is still there, in songs like "The Dance," in which a cop holds a loaded gun while dancing with a woman, before "the gun goes off / and paints her face all red."

"Everyone thought it was about Phil Spector," he says, but the song was inspired by a scene from a film called The Werckmeister Harmonies: "This soldier dances with this woman, and the soldier has his gun out, and they dance in a circle. And she makes a really good attempt at not looking freaked out, but you can tell she is, a little bit."

Another standout track is "Decibels and Little Pills," with its chorus of "No one here is gonna save me," which Eitzel describes as an anthem to nightclubs. "Every time I go to a nightclub, you always have people singing about fucking, or about love, or about peace, or about coming together, and they never mean it. It's always just shadowplay with dollar signs," he says. "So for me a nightclub just means, 'No one here is gonna save you -- babe.'"

Which isn't to say Eitzel doesn't understand the appeal of seeing people like, say, him perform at one. "What does Paul Stanley say: 'No one would ever pay money to see their neighbor'? And I think it's true of nightclubs: No one would ever pay money to do what they always do. They want to be out of their homes and be somewhere different," he says. "That's the Paul Stanley theory of life -- and I'm happy to go along with it." 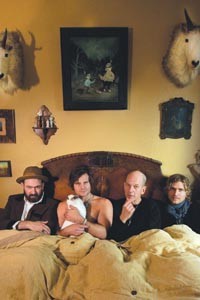