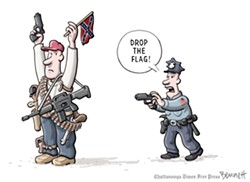 “Armed,” by Clay Bennett of the Chattanooga Times Free Press

While Donald Trump turns the race for the 2016 presidential election into a punchline, the ToonSeum takes jokes and presents them as a powerful vehicle for change.

Slinging Satire: Political Cartoons and the First Amendment, curated by Rob Rogers, the Pittsburgh Post-Gazette cartoonist and ToonSeum board president, courageously takes on civil rights, racial inequality, terrorism and the impact of art on politics.

The provocative exhibit features digital prints donated by 20 renowned artists from newspapers and online publications across the country, including the Los Angeles Times, The Washington Post, the Chicago Tribune and The Boston Globe.

The most striking part of the exhibit is “Je Suis Charlie,” a tribute to those fallen in the Al Qaeda attack at French satirical publication Charlie Hebdo this past January.

Featured artists grapple with grief and anger surrounding the incident. They also examine the ironic relationship between art — an aesthetic pursuit of pleasure and expression — and violent religious extremism.

“He Drew First,” by David Pope, is a simple but sharp composition in which a masked man with a smoking rifle stands wide-eyed. “He drew first,” he argues, as a lifeless journalist lies in a pool of blood and ink with his glasses, pen and drawing harmlessly resting beside him.

However, Islamist terrorists aren’t the only ones placed under the microscope. Big-grinned politicians and everyday citizens go head-to-head in each cartoon as they debate about immigration, the Confederate flag, abortion, marriage equality and more.

Guy Bado’s “He’s the Racist!” is a humorous drawing of men from different races and cultures pointing to one another, blaming the person next to him for the irrational animosity.

The pointing fingers in the image create a line of motion that goes round and round, reflecting the exhibit itself that travels in a ring around the room, reflecting a cycle of hatred that’s as seemingly inescapable as it is intolerable.

Satire is a powerful tool that highlights the absurdity of conflict, and guests will leave amused and moved by the talents of these cartoonists.

Slinging Satire is a must-see that reminds audiences that it’s OK to laugh at one another, as long as we all agree to get along. 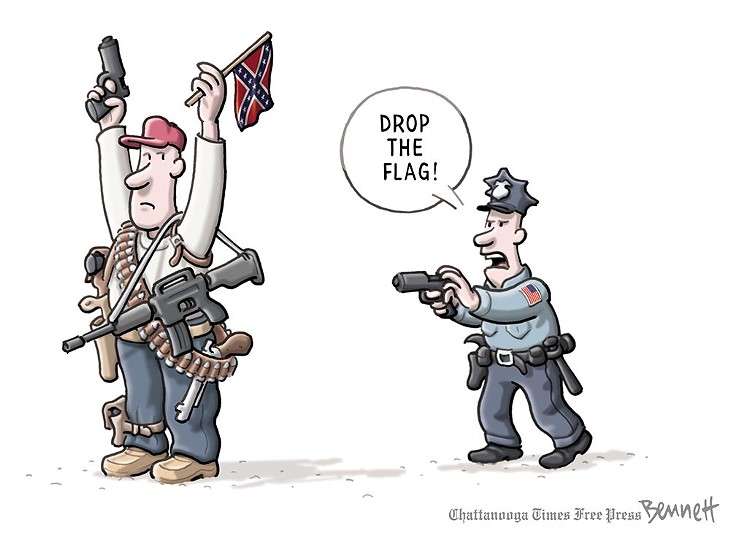 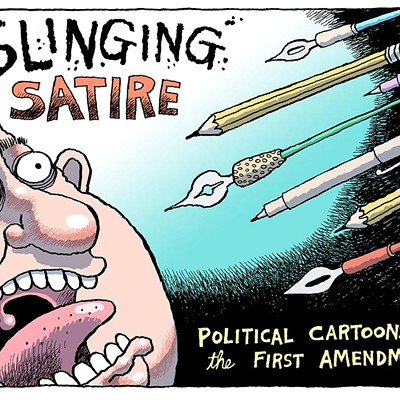