Slim Forsythe hangs up his hat (for now) 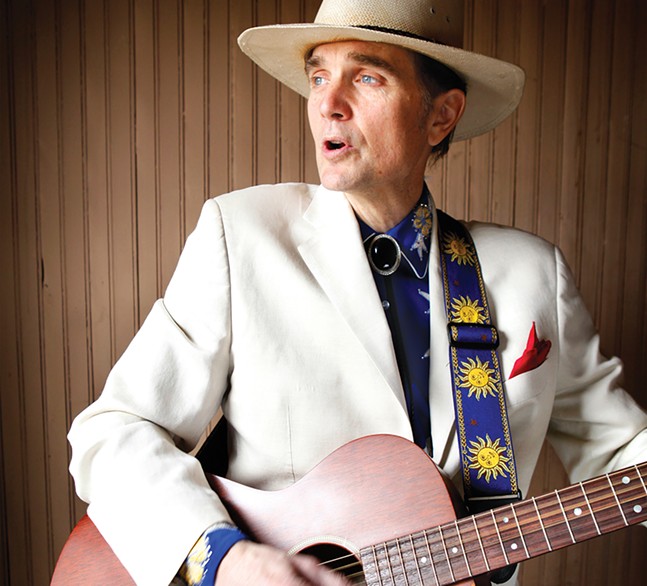 Last week it was announced that Nied's Hotel, the iconic Lawrenceville spot known for fish frys, live music, and its cozy, unfancy bar, would be closing permanently after almost 80 years in business. A few days after that, Forsythe, a Nied's fixture, announced on Facebook that he'd be taking most of 2019 off.

"As some of you know, Nied's Hotel has closed. And that has confirmed an idea that has been growing in my mind for some time now," he wrote. "And so I'm announcing that my next show, at the Club Cafe on Wednesday, January 23rd, will be my last (and only) public appearance in the Pittsburgh area in 2019."

Forsythe, a former lawyer turned full-time country-bluegrass icon, is unsure what exactly 2019 and beyond will bring him, but he clarified in his post that he's not falling off the radar completely. Pittsburgh City Paper reached out to Forsythe via email to get more details on his time off and his long history with Nied's. Catch his last show of 2019 at Club Cafe on Jan. 23, with Wayne "The Train" Hancock.
__

You wrote that you were planning on announcing your last show after a few more performances at Nied’s. When did you first feel like you needed to make this change?
I've had this kind of thing happen to me many times over the course of my life. Most recently, this probably started over the last 6 months or year.

Can you tell me about the first time you played Nied’s?
I played a show in the corner of the bar, just me and Jennie Kay Snyder. That was back in early 2008, I think. I hadn't moved in yet.

How many times do you think you played there?
A conservative estimate would be ten years x 10 shows = 100 times.

What is the most memorable show (whether you played it or not) that you’ve witnessed at Nied’s?
Well, there would be several in the top ten! But if I had to pick...it would be the night we did 40 Hank Williams songs in a row without stopping. That was October 13, 2018, with Candy Mountain, Pete Freeman, Tricky Mannion and Jane West. A VERY close second would be Surfin' Christmas just last month with the Turbosonics.


I imagine these changes are bittersweet. Now that it’s been announced, how do you feel?
It feels right to lay it aside now. Yes, bittersweet is a good word. I've wanted to be a singer/player in a band since I saw the Beatles on the Ed Sullivan Show in 1964. Singing and playing this stuff for the last 14 years as Slim Forsythe has been a blast. But I feel good. I feel excited to begin the next chapter.

You mentioned the role that your faith played in this decision. I’d be curious to know how your faith and music career have intertwined over the years? How have they informed one another?
The stuff that always grabbed me the most was the Gospel material. The old Hank & Audrey duets; the Stanley Brothers; Gillian Welch...many others. When I started way back in 2004, I didn't intend to do so much Gospel material, but as I listened to the old recordings and as the Slim thing kicked in, it just happened that way. I became "A saloon singer with a Gospel problem!" And that was wonderful. There was no greater feeling than to sing "I Saw the Light" or "Will the Circle Be Unbroken," in a crowded, smoky bar past Midnight. Those were enchanted nights and will stay in my mind and heart all my life.

When you wake up the day after the show, Jan. 24, how do you think you’ll feel? What will you do on that day?
I will hop on the 91 Bus to Aspinwall and hop in a Mini Bus and drive my Thursday afternoon shift for North Hills Community Outreach's "Free Rides for Seniors" Shuttle. All aboard the Slim Train! ...Yes, I will do that...but to answer the rest of the question...I think I'll feel good. Right. It feels right to make the change now. I'm 63. That's no spring chicken. There probably would never be another place like Nied's Hotel for me. I'm not looking for an alternate venue. I'm thankful for what we all managed to create there and I'm satisfied. I feel like I'm closing one chapter in the book of my Life. I'm interested in the next chapter now.

What advice would you give to the younger generation of Pittsburgh musicians that you’ve gotten close to? If they’re feeling despondent about the closing of Nied’s and your retirement from performing, what message would you want to send to them?
Be kind. Don't bash the hipsters. Don't bash "modern country." Don't let yourself be defined by what you hate. Listen to and play and create from out of what you love. Good music will always find a way into this World.

Tell me about this final show and what you have planned for it.
As Jimmy Nied might say... "It's going to be Slim's 5th performance of a lifetime this year!" I've selected seven songs that mean a lot to me and it's just going to be me on guitar and Candy Mountain (Erin Snyder) on stand up bass. And I'm thrilled to be opening for Wayne Hancock and thanks to Opus One and the Club Cafe for this opportunity.

Anything I didn’t ask about that you’d like to share with CP readers?
Please mention, if you can, that my music is available via Get Hip! Gregg and Barbara have been very good to me.