Mike Birbiglia mines his personal and professional life for this comedy 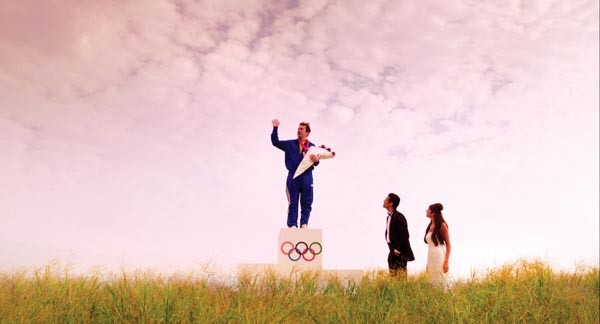 Matt (Mike Birbiglia) wins the Dustbuster Olympics ... in his dreams.

In the first scene of Sleepwalk With Me, protagonist "Matt Pandamiglio" addresses the camera directly and assures us that the story he's about to tell is true. Which makes sense, since Matt is portrayed by Mike Birbiglia, whose own life mirrors Matt's, and has been recounted in the eponymous book, one-man stage act and as stories on NPR's This American Life. (Birbiglia also co-directs the film with Seth Barrish.)

Matt traces his troubles to finally moving in with his "wonderful" girlfriend of eight years, Abby (Lauren Ambrose), an unnerving toe-dip into adulthood. He quits his bartending job to be a standup comic, finding life on the road to be a passive-aggressive way to avoid big questions about marriage, career and health. The story suggests his unresolved anxieties manifest in vivid terrifying dreams that cause him to sleepwalk, sleep-fight and sleep-jump-out-of-windows (really).

Sleepwalk hits three main beats — Matt's stagnant relationship with Abby, his fledging comedy career and his increasingly troubling sleep disorder. But only in the comedy-career portion is there any forward narrative. Admittedly, the point of the film is to illustrate Matt's refusal to address Abby or his illness, but returning to pluck those strings grows tiresome. The bizarre dream sequences — winning the Dustbuster Olympics, or running from a military-control room — are depicted literally, and come off more goofy than disturbing. (Even the best filmmakers have trouble with dream sequences; in a movie about dreams, I guess there's no way out.)

And while Birbiglia's life story was all new to me, I found this iteration somewhat spare, its singular focus on Matt shifting the work into the well-worn territory of men-who-won't-grow-up. I was more interested in Matt's mordantly funny and illuminating recounting of being a struggling comic: the middle-of-nowhere gigs; the grind of low-budget travel; the trial by fire (or more correctly, the roaring silence while bombing before live audiences); and the prickly camaraderie between fellow comics, in which empathy is riddled with hard-eyed competition.

Matt (and by extension, Birbiglia) eventually finds his comedy sweet spot by riffing on his relationship troubles. Sleepwalk posits correctly that the best humor often comes from the personal and the painful, and not from riffs on airplane food. And though this generates the film's best material — recalling Louis CK's similarly themed TV show — one of the film's noticeable gaps is that we never learn if Abby knows Matt is mining their troubles (most of which are caused by his immaturity), not just for laughs, but for his own professional success. In a more sharply drawn account, this collateral cost of the comedy-of-the-self ought to be accounted for.