At this comfy-cozy neighborhood spot, the modern menu proves a bit uneven

Talking about neighborhood places for gathering, eating and drinking tends to bring to mind the humble corner bar, breakfast joint or coffee shop. But our lives extend beyond the merely humble, and we all have favorite places that are out of the ordinary, where the special occasion blends with the familiarity of the community right outside our doors.

Slate Bistro is a stone's throw from South Hills Village mall, but it embodies a neighborhood place as surely as anywhere everybody knows your name. The location, inside a modest converted house off the main drag of Fort Couch Road, contributes to the comfy-cozy feel, but so does almost everything else — from the intimate scale of the bar that greets guests to the decor that clearly reflects an individual's taste, not a designer's vision. It's the kind of place where the server greets one as a friend and where you take out-of-town guests — not to impress them, but to share a personal landmark.

All of this comes from chef Cheryl Tacka and her partner, David Sgro (who has a track record at high-end Italian restaurants throughout the Pittsburgh region), as well as family history in the South Hills. (A relative is memorialized in a shadow box with a drawing of the mid-century-modern entrance of the steakhouse his family used to run.) On Slate's modern menu, which changes monthly, Italian cuisine mingles comfortably with French, Continental and even American Southwestern. Preparations are perhaps a touch baroque — every salad, for example, included between six and 12 ingredients — but we were enticed by the perfectly autumnal selection.

Alas, the first step was a misstep. Rapini is bitter by nature, but so are many other things we like to consume (coffee and beer come to mind); the key is to temper the bitterness with complementary flavors and preparations that work with, not against, the nature of the vegetable. Our starter of rapini with Parmesan and pine nuts served mainly to showcase the vegetable's most egregiously sulfurous notes, which overwhelmed the contributions of the dish's other ingredients. It didn't help that it was also over-cooked to suit a cafeteria steam table, army green and mushy.

Fortunately, Angelique's Slate salad was a veggie tale with a happier outcome. Tiny seeds in the cranberry vinaigrette signified real cranberries, not mere juice, and the dressing's tartness was a seasonally appropriate alternative to citrus. The substantial plate of mesclun greens, mandarin oranges, chick peas, walnuts and blue cheese would make an excellent meal alongside a bowl of soup. 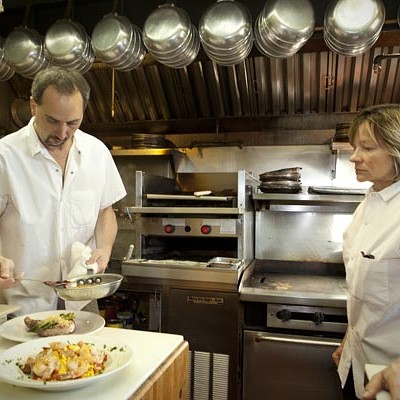 Of our entrees, by far the most successful was the New York strip, a cut that can stand on its own but also plays nicely with bold accompaniments. The chef layered on the flavor, with thin-sliced, sautéed shiitake for umami; whole slices of salty, crispy pancetta; and generous shavings of nutty Parmesan. A peppercorn demi-glace unified the dish without smothering all the components, while playing up the traditional pairing of pepper and steak. Savory goat-cheese bread pudding, served alongside, was lovely, but was so tender and mild as to recede into the background of such a robust main course.

The reason that pork is so often paired with fruit is that the rich meat can stand up to the sweet counterpoint, but Slate's boneless chops — not the Frenched, bone-in chop promised on the menu — were under-seasoned to the point of blandness. While the thin, crisp apple slices and small chunks of soft fig weren't themselves too sweet, in the absence of significant savoriness to the meat, the dish simply failed to come together. What seemed to be dried rosemary didn't advance much flavor.

Ordering Southwestern fare at a restaurant that doesn't specialize in it is always a risk, but Angelique took it for shrimp and corn grits with andouille sausage, sweet red pepper and spicy pepper-jack cheese. Small bits of the cheese appeared to have been stirred in after the dish was cooked, and they concentrated delectably in the bites where they melted. The grits had a texture that was more polenta than Cream of Wheat, and the pleasingly plump shrimp, sweet corn, bright red pepper and spicy sausage brought complexity to every mouthful. Only parsley seemed like an outlier in this tasty dish.

Slate serves its community with a varied menu of fine food, and monthly menu changes allow for experimentation and the regular discovery of new favorites. Such a strategy also allows for less-favored dishes to be retired — which, over time, should bring the quality consistently in line with the prices.