This new James Bond film is as much about soul-searching as much as it is about seeking a gizmo. 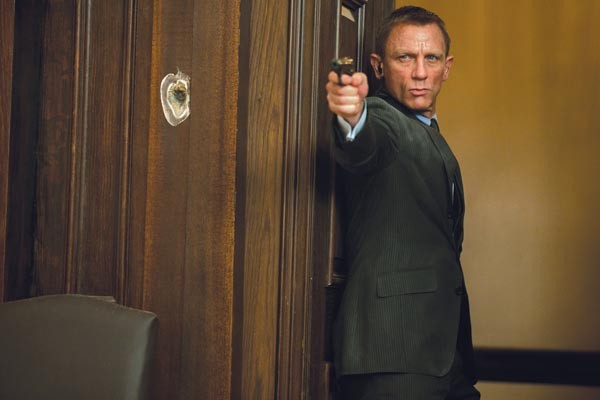 After an operation goes wrong, a chastened James Bond (Daniel Craig) returns to MI6 HQ in London. Relations are icy with M (Judi Dench), and a new supervisor (Ralph Fiennes) is eager to dial back field work. But Bond's bungle has left a dangerous fellow, with ties to M, on the loose. (This villain is portrayed with brio by Javier Bardem, who adds another dreadful hairdo to his CV.)

Skyfall, directed by Sam Mendes, is more invested in a broody story about Bond, M and the bad guy than in being a hyper-kinetic actioner. There is action, including an opening high-speed chase through Istanbul's markets in which the requisite baskets of fruit are upended. But that chase has serious inter-personal consequences that propel the narrative. Oh, there's a missing hard drive, but Skyfall is about soul-searching as much as it is about seeking a gizmo.

What's fascinating about Skyfall, and what gives it surprising heft, isn't just that MI6 is under literal attack, but that old-timers like Bond and M are fighting for their very existence. What is the role of such Cold War institutions, including 00-agents, now, when threats are often stateless and the terrorist might be the guy next door?

It's not just Bond feeling his mortality, and wondering if his time has passed. Skyfall is rife with similar allusions, among them: obituaries; total housecleaning; re-visiting childhood homes and disused secure locations; and paintings of warships being hauled off for scrap.

But for us, there's also fun in looking back. As befitting the 50th anniversary of James Bond, Skyfall offers homage to memorable moments in the franchise. A confrontation in a Shanghai skyscraper becomes a real-life version of Bond's distinctive credits sequences, as silhouetted men stalk each other before crazy, colored moving light patterns. Even the favorites are up for revision: Riding in Bond's Aston Martin DB5, M grumbles, "Not very comfortable, is it?"

Skyfall turns out to be thoroughly enjoyable, despite Bond's brooding and its distinct lack of gee-whizzery. Here, the fancy gadgets have been scaled back for old-school tools and some MacGyvering, and there are no exotically constructed vehicles. It also helps to have pros like Craig, Dench, Bardem and Fiennes (plus Ben Wishaw as the new Q) deliver the script's darker, self-reflective moments.

In the new now, Bond v. 23 has been "killed," and must rebuild to adapt — plus catch the bad guy and steal a kiss or two. When asked by the villain if he has a hobby, Bond says sardonically: "Resurrection."