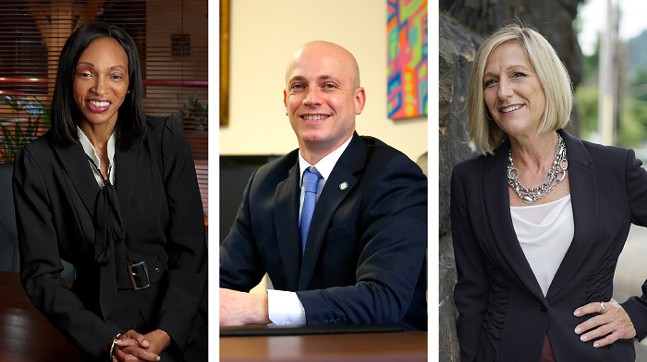 CP photo of Pappas: Jared Wickerham; Photos of Henry-Taylor and Middleman: provided by campaign
Nicola Henry-Taylor, Mik Pappas, and Lisa Middleman
The endorsement from the Allegheny County Democratic Committee is becoming a lot less popular than it used to be. With high fees just to seek the endorsement ($8,000 for county-wide seats), a committee that has a recent history of some members openly supporting Donald Trump, and many examples of local candidates winning their races without the endorsement, several candidates this cycle are openly shunning the endorsement altogether.

The endorsement still comes with some cachet, especially for lesser-known judicial races, not to mention candidates' names on slate cards sent directly to voters.

But, three local candidates for Common Pleas Judge who are skipping the endorsements are deciding to join forces instead and endorse each other in an effort to boost their similar platforms focused on judicial reform and equity in the court system.

District Judge Mik Pappas, and attorneys Nicola Henry-Taylor and Lisa Middleman announced on Feb. 9 that they have endorsed each other in an effort to “elect like-minded judicial candidates to the local bench,” according to a press release.

Henry-Taylor is campaigning on reforming the criminal justice system and has experience examining police use of force policies and court rules on bail probation and incarceration, according to her website. She says with a large number of Common Pleas seats available this election, it’s important for like-minded candidates to come together in order to effectively shape the court towards reform. Common Pleas Judge elections are county-wide races.

“With nine seats available on the court, its composition has the potential to look very different after this election. We are working together to make sure the court’s direction benefits everyone,” said Henry-Taylor in the press release.

Middleman ran in 2019 as a progressive independent for Allegheny County District Attorney, calling for an end to cash bail. She ultimately lost to incumbent DA Stephen Zappala. Middleman also represented many Black Lives Matter protesters last summer, after police charged dozens of them with misdemeanor charges, even though police used less-lethal weapons like tear gas and pepper spray on protesters.

“My conversations with people all over the county have made clear the need to fully engage the community in the vision of a legal system that provides fairness and equity to all,” said Middleman in the release.

Pappas, as a Magistrate District Judge, says he has eliminated the use of cash bail in his East End district, and has also lowered eviction rates by working closely with landlords and tenants.

“We’re standing in solidarity with each other and people all over Allegheny County whose families and freedoms depend on a fair and independent local justice system,” Pappas said in the release.

This is just the latest action running counter to the Allegheny County Democratic Committee. Pittsburgh Mayor Bill Peduto and Allegheny County Sheriff candidate Dom Costa both announced skipping seeking the endorsement. ACDC chair Eileen Kelly even recently felt the need to remind ward chairs that candidates who are not seeking the endorsement are not allowed to participate in meet-and-greets with committee members.

Henry-Taylor, Middleman, and Pappas are hopeful their collaboration can match some level of influence that the ACDC might bring to its endorsed candidates. According to the press release, the group hopes to “collectively mobilize volunteers and host joint petitioning events” in the coming weeks.