“I decided, ‘Why not?’ because I had nothing going anyway.” 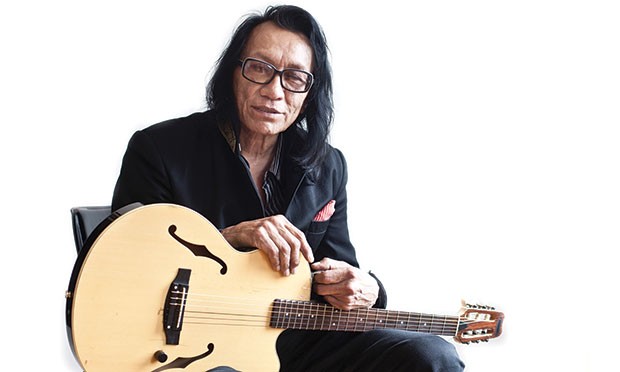 In an age when many so-called celebrities are famous for being famous, Sixto Rodriguez is a notable exception: He became famous for being unknown. The musician known simply as Rodriguez released a pair of albums — Cold Fact and Coming From Reality — in the very early 1970s on the small Sussex label. Both releases sank without a trace in the American music marketplace; original copies are sought-after collectors’ items. But — as the Oscar-winning 2012 documentary Searching for Sugar Man chronicles — Rodriguez’s albums were a hit in the then-isolated country of South Africa.

Rodriguez had long since quit music and returned to demolition work in his native Detroit, but in the wake of his belated rediscovery, he returned to live performance and touring. He’s grateful for the increased profile afforded by the success of Searching for Sugar Man. “We’ve gotten a lot of mileage, and it was global,” he tells CP in a recent phone interview. “And that put us across.” But he emphasizes that he had nothing to do with the making of the film. “I’m only in the film eight minutes,” he points out.

In fact, Rodriguez was initially reluctant to be involved at all with the documentary. “The director came to Detroit five times before I said, ‘OK,’” he says. He relented on that fifth visit from director Malik Bendjelloul. “It was winter,” Rodriguez recalls. “They were in the alley taking pictures. And I decided then as I looked at them, ‘Why not?’ because I had nothing going anyway.”

Rodriguez’s songs were topical in 1970, and they retain their timeliness now, 45-plus years later. The lyrics to songs like “Sugar Man,” from Cold Fact, are applicable to today’s opioid crisis. But these days, Rodriguez is also concerned with more mundane matters, like renovating his house and obtaining unpaid royalties from the overseas success of his Sussex albums. “I’m anxious for it to resolve,” he says. “We’re still working with a major law firm.”

Renovation continues on the Detroit home he bought at a government auction in 1976 for $50. As a working-class man, Rodriguez sees the value of owning a home. “Housing is really very important. If you can secure that, I think you have an easier path,” he says.

But a demanding touring schedule means that the singer-guitarist is often too busy to work on his house. He maintains a dozen bands, one for each region of the world where he plays. “I have an Australian band, a South African one, an English band ...,” he says. His current group includes London-based lead guitarist Ed Coonagh, Jesse Ingalls on bass, and drummer Blake Manning, from Toronto.

Decades after the domestic commercial failure of his albums, Rodriguez is thrilled to be playing in front of enthusiastic crowds. He mentions a recent concert in Vancouver. “That was the noisiest audience we’ve had, ever,” he says. “I don’t know if [something] was in the water or what, but they were very enthusiastic, to say the least.”