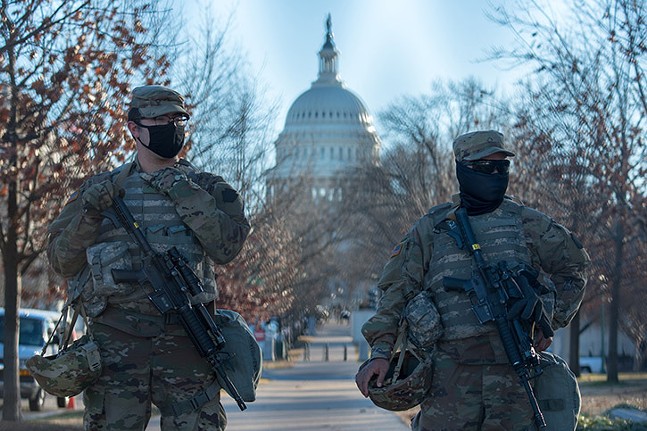 Armed National Guardsmen on security detail at the U.S. Capitol on Jan. 19
Even though Pennsylvanians voted to elect President Joe Biden in 2020, the state still has plenty of fervent supporters of Donald Trump. Just take a drive through many rural and exurban parts of the state, including many sections of Western Pennsylvania, and it’s easy to spot Trump signs still in yards, even after the election. (“Trump 2020: Make Liberals Cry Again” signs seem particularly popular.)

And it appears among those supporters are people so fervent, they were willing to break federal and local laws in the name of Trump.

So far, Pennsylvania has the second most residents charged in connection to January’s insurrection on the U.S. Capitol of any state in the country. Twenty Pennsylvanians have so far been charged with federal and local offenses, according to NPR’s tracker and news reports. Only Texas, with at least 23 residents charged, has more among U.S. states.


Dozens of Pennsylvania Republican officials have played a role in perpetuating the falsehood that the 2020 election was stolen. U.S. Rep Guy Reschenthaler (R-Peters) signed onto a failed Texas lawsuit that sought to invalidate the ballots of millions of voters in Georgia, Wisconsin, Michigan and Pennsylvania. Former congressional candidate Sean Parnell (R-Ohio Township) and U.S. Rep. Mike Kelly (R-Butler) sued Pennsylvania in an attempt to invalidate millions of mail-in voters. That suit was rejected by state and federal courts.

State Republican lawmakers also contributed by signing letters after the election objecting to the state’s election results, even though those results meant their re-election. State Sen. Doug Mastriano (R-Franklin), who organized buses to take people to D.C. the day of the insurrection, and former state Rep. Rick Saccone (R-Elizabeth) were present at a demonstration near the Capitol grounds, shortly before the rioters entered the grounds and building.

“While not every GOP elected official attended the insurrection in Washington, hundreds are complicit in spreading the lies that inspired their supporters to riot in front of the entire world,” said state Rep. Leanne Krueger (D-Delaware) on Feb. 11, according to the Pennsylvania Capital-Star.