CP Photo: Hannah Lynn
Arsenal Park
While gathering with friends indoors risks the spread of COVID-19, and as being cooped up indoors for months begins to take a toll, public parks have become more valuable than ever. They provide a free, public space for people to read a book, play sports, have a picnic, and hang out with friends safely while getting fresh air. Parks use has increased significantly since the pandemic first hit, and that will likely continue through the summer.

Everyone knows the big parks like Schenley, Frick, Highland, and Mellon park, but if you're looking for a change of scenery (literally), check out these underrated, but perfectly lovely parks within Pittsburgh city limits. 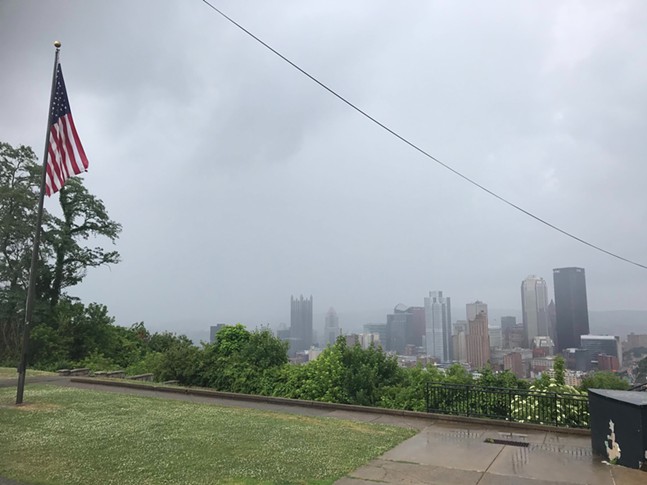 CP Photo: Ryan Deto
Beautiful day at Emerald View Park
Emerald View Park. Bailey Ave., Mount Washington.
News editor Ryan Deto says this Allentown park is "one of the only views in the city where you can appreciate the Cathedral of Learning and the Downtown skyline simultaneously." It has plenty of benches for enjoying the view, trails, and playgrounds, as well as historic sandstone steps and walls.

August Wilson Park. 1803 Cliff St., Hill District.
This is one of the newer parks in the city, as it officially reopened in 2016 after renovations (it used to be Cliffside Park). The park has a solid view of the city skyline, and because of renovations, has newer park features, like accessible pathways. It also features a wall covered in quotes from Pittsburgh native August Wilson's plays and a permanent display of Teenie Harris photos, which celebrate and document historic Black culture in Pittsburgh.

Arsenal Park. 276 39th St., Lawrenceville.
I didn't used to think of Arsenal Park in Lawrenceville as underrated, but I've noticed that every time I go (which is often), there are only a handful of people. But it's a good park with plenty of trees for ample shade coverage, tennis courts, a baseball field, and a playground. Since it's walking distance from restaurants and gas stations, it's also a great park for a takeout or snack picnic. 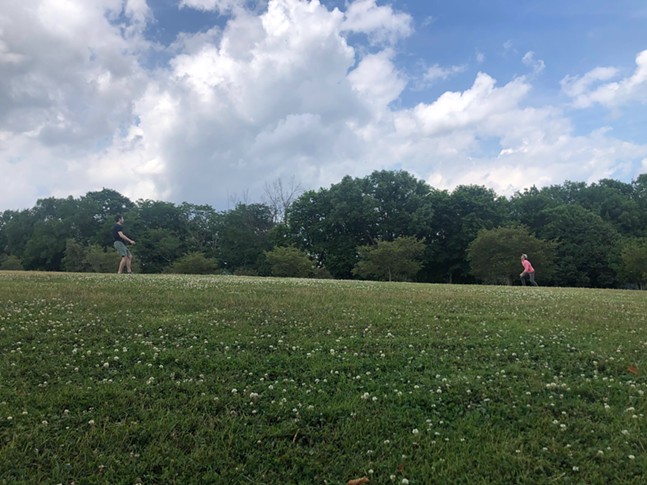 CP Photo: Hannah Lynn
Actually beautiful day at Riverview Park
Riverview Park. 159 Riverview Ave., North Side.
Located in Observatory Hill on the North Side, the park is known, naturally, for its observatory. The observatory itself sits atop a sprawling hill, perfect for lounging or playing frisbee (both of which I did last weekend). The park also has several trails, a baseball field, and a picnic shelter that used to be a church.
click to enlarge

CP Photo: Lisa Cunningham
Frank Curto Park
Frank Curto Park. Bigelow Blvd., between Downtown Pittsburgh and Polish Hill.
This little sliver of a park, located near Polish Hill and Bedford Dwellings, is named for a former horticulturist for the Pittsburgh Department of Parks and Recreation (there is also a bridge and a street named for him around the city). The park features several sculptures, most notably a giant yellow sculpture by John Raymond Henry that looks like a pile of french fries. It's a small, but unique park. It's not always easy to enter, and you likely need a car, but it provides great views of the Allegheny River and a perfect spot for a sunset picnic.

Beechview-Seldom Seen Greenway. 990 Saw Mill Run Blvd., Mount Washington.
As the name suggests, you might not have come across this park very often, but this area, located between Beechview and Mount Washington, is a mix of trees, brick tunnels and walls, some covered in graffiti, a creek, and abandoned train tracks. Great for urban hiking.