Six artists project a variety of approaches in Emission Theory.


The term "emission theory" can be traced to the ancient Greeks, who hypothesized that objects are made visible by light emitted by the human eye; the term also has a more modern physics usage, about luminous objects emitting light as streams of particles. Either way, to title the current show at La Vie gallery Emission Theory is fitting: The 46 new works by six artists energize the gallery space by emitting a variety of aesthetic voices, from the broadly non-objective to the intricately figurative.

The show was curated by La Vie Gallery owner Bronwyn Loughren and operations manager Thommy Conroy. According to their exhibition description, each of the six artists -- Corey Antis, Rafael Canedo, Ben Kehoe, Thad Kellstadt, Melissa Kuntz and David Montano -- attempts to resolve the difficulty of depicting spatial depth on flat surfaces. While some works capture a deceptively real sense of fictive space, most of the artists revel in the design possibilities offered by two dimensions.

Philadelphia native Corey Antis is no stranger to the Pittsburgh art scene: His work has appeared, most recently, in the Kellstadt-curated Snowblind, at Space Gallery. Antis' acrylic-on-panel work "Model" is the consummate expression of the tension between three-dimensional objects depicted in two dimensions. The figure dominating the white picture plane is an orange rectangle, marked by 90-degree-angled white striations and capped by a black square. The rectangle seems to shift, at will, from hollow, receding shaft to protruding sculptural box.

Melissa Kuntz, an associate painting professor at Clarion University who frequently writes for CP and Art in America, presents a suite of nine works celebrating photo-realist style -- more suggesting the frank spirit of David Cone than the gleaming luster of Audrey Flack or the reflective sheen of Richard Estes. In her deceptively sculptural representations of retro signs, such as the oil-on-canvas works "Mo" and "Co," where neon tubes cast dramatic shadows over enamel lettering, Kuntz manifests a distinct technical virtuosity. She also gives equal consideration to both a subject's abstract potential and its authentic appearance.

David Montano contributes 13 works, from framed collages to drawings on paper. Works including two mixed-media collages, both titled "Water Rotavator," offer clever tongue-in-cheek references. While one collage explores the abstract rhythms of torn and pasted paper shapes, the other features a miniature water pump whose shape suggests a toilet. Ironically, it is fastened to heavily water-stained cardboard.

For his part, Kellstadt -- until his recent relocation to Chicago the Pied Piper of Pittsburgh's twenty- and thirtysomething creative set -- produces work full of indecipherable riddles, his flat picture planes occupied by inscrutable icons. In the acrylic on panel work "What a way to go," a bearded, long-haired figure bearing the facial profile of a pink conversion van stands brandishing an enormous knife from which multi-colored drops of blood run from blade to handle like candle wax. While its specific meaning remains enigmatic, it brings to mind every cautionary tale mothers have told about the dangers of hitchhiking.

And there's just something amazing about Ben Kehoe's paintings: They are absorbing little parallel worlds, where anything can happen. He states that one of his influences is medieval art, and certainly, some of his characters do look like they've crawled from the illuminated manuscripts at Oxford's Bodleian Library. His graphic style is full of dynamic pattern, like the acrylic and gouache on wood panel "Your Friend is a Killer," which depicts a man in chain-mail leggings kneeling between two woolly sheep, which he embraces earnestly. Although his grin and gaze seem sincere -- even if his physiognomy is slightly unsettling -- his knife, tucked into his belt, is on obvious display. The armored man may not have insidious designs on his cloven-hoofed companions, but he could eventually wage the kind of limb-hacking battles Kehoe has depicted so well in his work elsewhere.

Logically traveling from Antis' broadly abstract perceptual explorations to Kehoe's highly intricate figurative works, Emission Theory flows easily from one side of this storefront gallery to the other. Instead of crying out from the walls as a cacophony of disparate voices, the groupings are both strikingly individual and one with La Vie's elegantly funky and inspired ambiance. 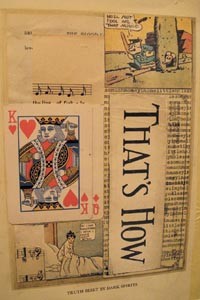